I went looking for a “cat dragon” to share while I force myself to write about what’s been going on with my own ‘kids’ (my clowder* of housecats), and I found this wonderful art by American professional artist Sebastien Millon, posting as sebreg.  First up is his Cat Dragon Flying, and he writes:

I’d always wanted to do a flying scene with Cat Dragon but was having trouble drawing it until I came up with this one recently. Drawing the clouds was good fun!

Meanwhile, I’m writing a post and facing a reality I never wanted.  While I’ve had cats my whole life, rescuing my (then pregnant) daughter Rei in 2002 was the best thing that ever happened to me.  A month later she had three beautiful kittens under my dresser — Amara, Michelle, and Artemis, and with Rei, all named for characters from the anime Sailor Moon.  I was lucky enough to keep all four and be their mom.

We lost Amara back in 2015, and then momma Rei in 2018, and sadly, we just lost my daughter Michelle a month ago.  It was so sudden… she was okay, and then one night she wasn’t eating.

I’ve got to break up this sad post with lots of pictures, so here’s the next from Sebastien called Cat Dragon Desert.  He writes:

A little homage to Looney Tunes (and of course Cat Dragon looks like Toothless!). Can you guess who I rooted for in those cartoons … and nice to see Wile E. Coyote finally upgraded to some proper tech!

It’s conventional wisdom that cats are good at hiding when they’re sick, although my kids had never done that in their lives… but the next morning Michelle had stars in her eyes, and we knew it was time.  We spent the day cuddling her before bringing her in to gently send her up to Starclan.**

Losing Michelle really shook us.  We always thought she would be the last of the (Sailor) “Moon kids” to go, since her brother Artemis has always been a little ‘plus-size’ like his human parents, and living with diabetes and twice-daily insulin shots and lots of other health problems and surgeries over the years.

And now, so soon after letting Michelle go, we’re losing him as well.

Here’s another Cat Dragon by Sebastien.  He captions this one:

I drew this design with the intent of doing tshirts. I do want to keep trying to play around with black/white drawings from time to time. oh and yes yes high degree Toothless-feel with this one of course. Drawing cat dragon in black/white style def heightens the resemblance!

Artemis is hardly eating anymore, and sadly our vet won’t listen to us when we ask for more of the anxiety meds that have always made him eat ravenously — they say it could damage his liver.  But we’re just trying to keep him from starving, not cure him!  And we think Michelle must have left us from sudden organ failure as well, and it was relatively quick.

For now, Artemis is still alert and moving around, even if it’s just a shaky shamble from cat bed to cat bed, or to come to the couch and ask to be brought up for cuddles, or to come to his ‘spot’ to get a bit of food in the morning or afternoon.  It’s hard, knowing that the end is close, but not here yet.

Here’s a really beautiful piece by Sebastien called Cat Dragon Flying Over Flower Field, with another of his original characters.  He writes that “Hero Princess Bear is on one of the wings, picking flowers.”  (She’s one of his other original characters, and also in the first image above.) 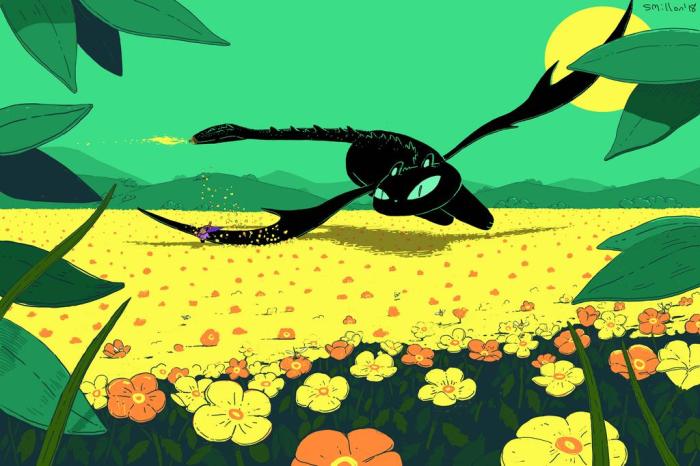 With the other kids, we always knew when it was ‘time,’ and we were able to take them in, say goodbye, and let them go; but how do we decide when it’s ‘time’ for Artemis, when he still seems all right and not in any pain or major distress?

On the other hand, I’m terrified he might go during the night or during the workday, when we’re not there to hold him and say goodbye.  And on the other, other hand, I’m not looking forward to that panicked morning or afternoon when we discover him with stars in his eyes, then have to call into work or take him to the emergency vet in the middle of the night to make sure his transition is gentle.

So it’s a heartbreaking time in our home right now, and I don’t think there’s a right answer.  And I just had to chronicle it here.

Here’s one more piece from Sebastien called Be a Light feat. Cat Dragon and Hero Princess Bear, which lots of his commentors called inspriational, and I agree.  And I could use some light right now. 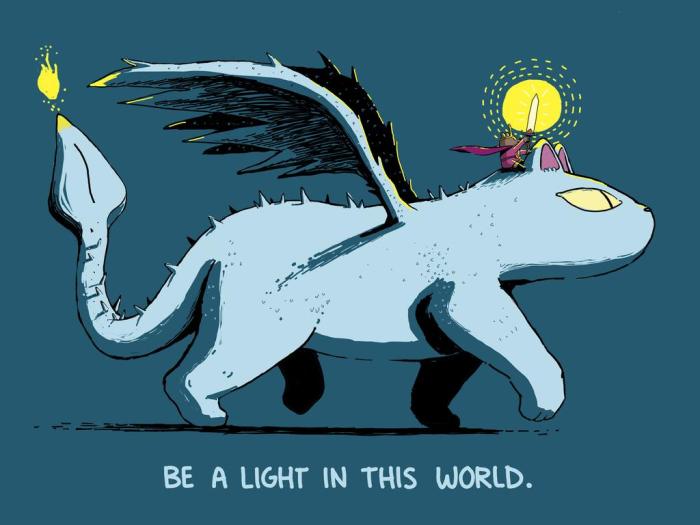 Luckily, we still have our younger rescue kids — River Song, Amy, and Rory, the (Doctor) “Who kids,” only four and three years old, and here’s hoping they won’t develop any health problems for a long, long time.

They remind us that Artemis was young and healthy once, and that he had a great life with us, and he’s got his mother and sisters waiting for him up in Starclan.  And while it’s difficult to let go, we just have to cherish the time we have left with him, and love all of them, and all of our future rescue ‘kids’ to come.

You can find even more artwork by the talented Sebastien Millon at his official website and Deviantart gallery, follow him on Facebook and Twitter, check out his Tumblr, and support his work through his Etsy shop.

Thanks for reading this long, sad post — take care, and look for the August Birthstones before the month is out, as well as happier stories about the Minnesota Renaissance Festival that just opened over the weekend!

* A clowder is the collective term for a group of housecats, like a pride of lions, a school of fish, or a crash of rhinos.  You can also have a clutter, a pounce, or a glaring of cats, and you can find even more interesting Animal Groups at that section of The Almighty Guru‘s website.

** I’ve adopted the ‘Starclan’ concept for kitty-afterlife from the Warriors ‘cat book’ series by author Erin Hunter — the psudonym for a cadre of writers over the course of all the books (and other series) that every cat lover should read.

2 thoughts on “Cat Dragon by sebreg, and heartbreaking clowder news”