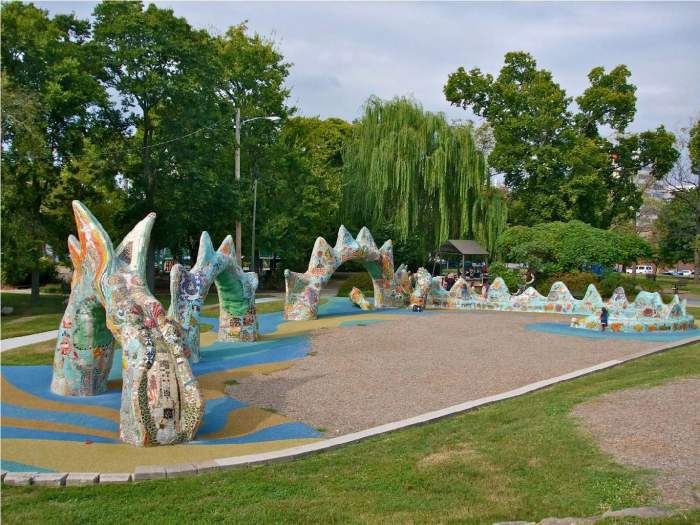 On the second day of our vacation as we continue our long drive, I’m excited to share information and images from multiple sources of the amazing stone mosaic sculpture called Sea Serpent, created by the late artist Pedro Silva.  It is the main feature of Fannie Mae Dees Park (also known as Dragon Park), a children’s play area here in Nashville, Tennesee. 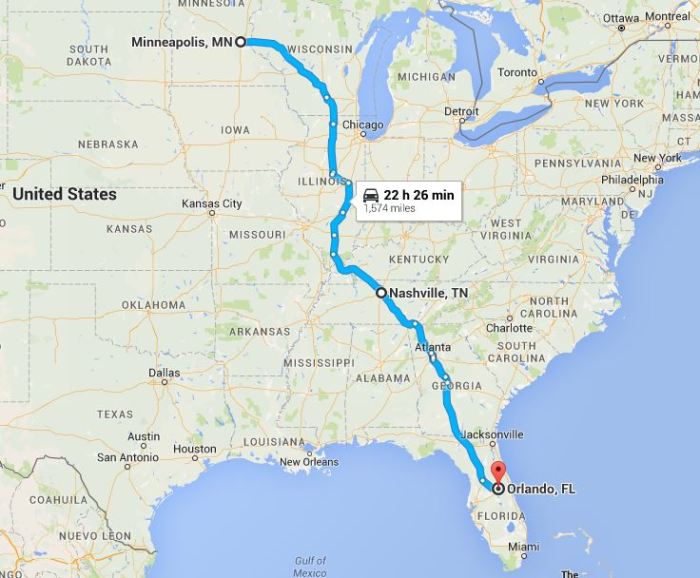 Nashville is about the halfway point on the almost 24-hour-long drive from Minneapolis to Orlando, so we stayed overnight at an AirBnB apartment (trying it for the first time!) to split the drive between two days and four drivers.  Hopefully I can convince my friends to make a quick stop in this park before we head out in the morning — I’m sure it’s a PokeStop or even a Gym, so there should be plenty of Pokemon to be had!

Here’s another picture of Silva’s Sea Serpent, beautifully lit in this photo called The Dragon taken by Jude Adam.

According to a wonderful, downloadable guidebook called “A Teacher’s Guide to Sea Serpent by Pedro Silva,” written and with photographs (including the first featured image above) by F. Lynne Bachleda, and published by the Tennesee Performing Arts Center:

“Sea Serpent,” built during 1980‐81, is a ceramic tile sculpture set in reinforced concrete designed and constructed by New York artist Pedro Silva.  It measures 12 x 36 x 61 feet.  It takes the form of a huge sea serpent which appears to be partially submerged beneath the surface of the playground.  The surface is covered in ceramic tiles of bright turquoise (swimming pool tile) and primary colors. The individual images are of sea creatures, clowns, popular personalities, clowns, animals, etc.  The sculpture is the focal point of Fannie Mae Dees Park at 2400 Blakemore Avenue in Nashville.

The sculpture is a site‐specific installation that depicts a mother “dragon” and baby dragon (completed the year following the initial main construction) emerging from the ground (representing the sea). A long curving bench represents the tail section. Five separate free‐ standing arched components make up the bodies of the two dragons. Sculpted tile heads are located at the tips of some of the serpent’s scales.

The covering designs were created on‐site and off‐site by various community members.  Volunteers were free to produce a design on any subject as long as they avoided religious or political imagery to keep the work free of controversy. After storage on contact paper they were placed by Silva to pleasing aesthetic effect. Thematically, each of the four body segments — not including the head that was primarily designed by Silva—feature elements and creatures of air, earth, sea, and imagination. On the serpent’s third arch, next to its tail, is a portrait of Fannie Mae Dees, the community activist for whom the park is named, although its common name is “Dragon Park,” deriving from the colloquial interpretation of the sculpture.

The blog Mosaic Art Source featured this sculpture in a really in-depth post in 2007 that you should check out, showcasing many close-ups of the community artwork on the dragon itself, including this photo called Woman in the Dragon taken by Liz: 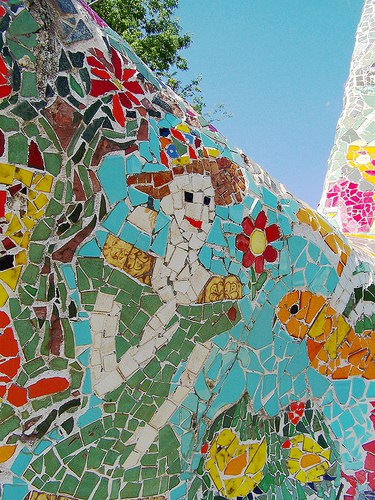 The Sea Serpent is apparently showing it’s age, however, so the group Hillsboro-West End Neighborhood Association in Nashville has started a GoFundMe page called Save Our Dragon asking the community to donate funds to restore the statue.  Their latest update from July 7, 2016 reads:

Thank you to all of our wonderful community partners and supporters — with your help, we have raised approximately $50,000! This includes donations to GoFundMe, checks from community members and a significant donation from Vanderbilt University. Thank you again! You are helping us reach our goal to #SaveOurDragon

The SaveOurDragon Chairperson Jan Bushing also noted back in May that:

Tony Silva, son of the Dragon’s creator, Pedro Silva, has agreed to come to Nashville to restore the mosaics with the help of community volunteers when the structural problems are resolved.

I really hope this group is successful in Saving their Dragon!

Here is one more photo, called The “dragon” of Dragon Park, taken by Brent Moore.

All right, that’s it for me today — I don’t expect all my vacation posts to be this long and in-depth, but I was really excited when my random Google search for “Nashville Dragon” led me to this discovery and I couldn’t help but share!  Take care everyone, and stay creative!