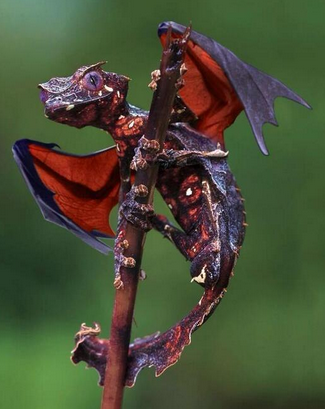 Yes, unfortunately, this is not a photo of an oddly-evolved gecko with dragon-like wings.  The picture does give me tons of ideas for how the tiny dragons in my novel might look, but sadly, this image was quickly debunked as a Photoshop by Snopes almost as soon as it appeared on the social media scene, back in September 2012.

While the satanic leaf-tailed gecko (Uroplatus phantasticus) is a real animal, it does not actually have wings. Those dragon-like appendages were added to a photograph taken by author, entomologist, and photographer Piotr Naskrecki.

Damn.  But hey.  It’s the last Friday of the month, and I don’t have anything prepared for my Random Writing for August.  I also don’t have a new chapter to share of the Neeka Story, even though I’ve been working on that all week.  So we’re all disappointed I guess.

I apologize for being so negative tonight, and hopefully tomorrow will be kinder.  Thanks for reading and stay creative.

One thought on “Satanic Leaf Tailed Gecko “dragon” … and disapointment”