Sorry I’m still behind, but this post was more detailed than I thought!  So, even though I wasn’t thinking about blogging much while on holiday, the day we went to Cardiff Castle in Wales, U.K., I decided to play a game with our tour group — find the dragons!  And then I photographed our adventure.

Now, as you might know, the national flag of Wales is emblazoned with the Red Welsh Dragon on a green and white field: 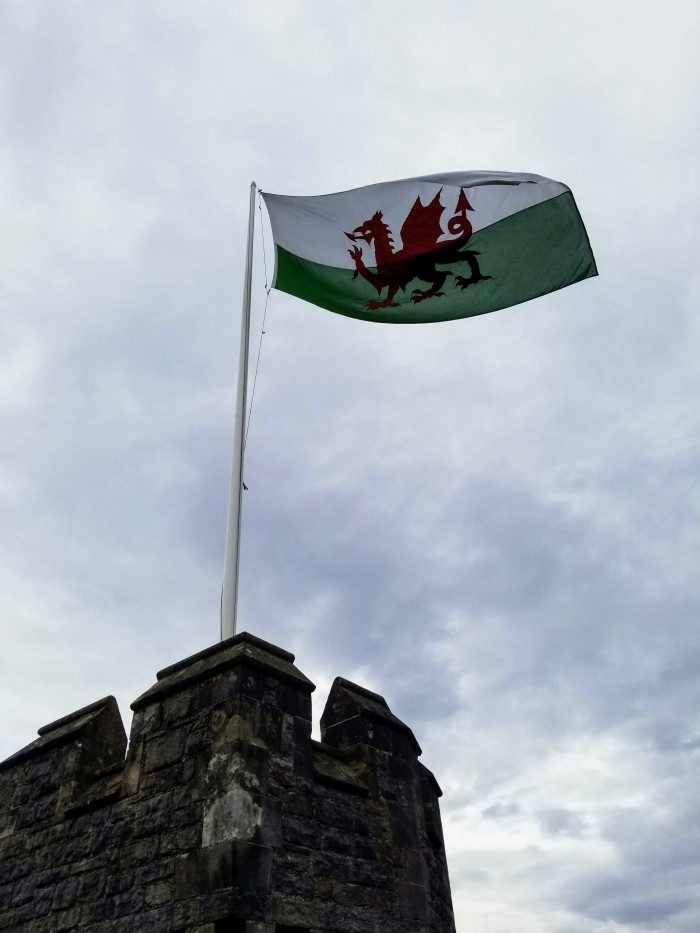 I waited a long time to get this picture just right, high atop the remains of the Norman Keep inside the Cardiff Castle grounds!

I figured with a dragon mascot, there’d be a lot of dragons around this castle!  Sadly, I was a little disappointed, but the dragons I did find are definitely interesting.

Admittedly, before I went to the British Isles, my geography knowledge of the area was a little sketchy, so here’s a great map from the site EnchantedLearning for reference.  Cardiff is the capital city of Wales, at the bottom center of the map, one of the four countries (with England, Scotland, and Northern Ireland) that make up the United Kingdom.  (The Republic of Ireland is in dark green, part of the British Isles, but not the U.K.)

And then, here’s a quick bit of background on the castle itself from Wikipedia and the official site of Cardiff Castle:

Cardiff Castle (Welsh: Castell Caerdydd) is a medieval castle and Victorian Gothic revival mansion located in the city centre of Cardiff, Wales.  The original motte and bailey castle was built in the late 11th century by Norman invaders on top of a 3rd-century Roman fort.  The castle … formed the heart of the medieval town of Cardiff…

The Castle passed through the hands of many noble families until in 1766, it passed by marriage to the Bute family. … [It was passed down to] the 3rd Marquess of Bute, who by the 1860s was reputed to be the richest man in the world.  [He] employed the genius architect William Burges to transform the Castle lodgings. Within gothic towers [Burges] created lavish and opulent interiors, rich with murals, stained glass, marble, gilding and elaborate wood carvings. Each room has its own special theme, including Mediterranean gardens and Italian and Arabian decoration. …

Following the death of the 4th Marquess of Bute, the family decided to give the Castle and much of its parkland to the city of Cardiff.

Here are a few shots of the exterior of the castle.  (Remember, I’m a writer, not a photographer, so forgive my amateur snapshots in this post!)

And now for the dragons!  Or rather, the fantastic beasts that the folks on our tour insisted must be dragons.  This first one we found was in the Winter Smoking Room, attached to this ornate fireplace. 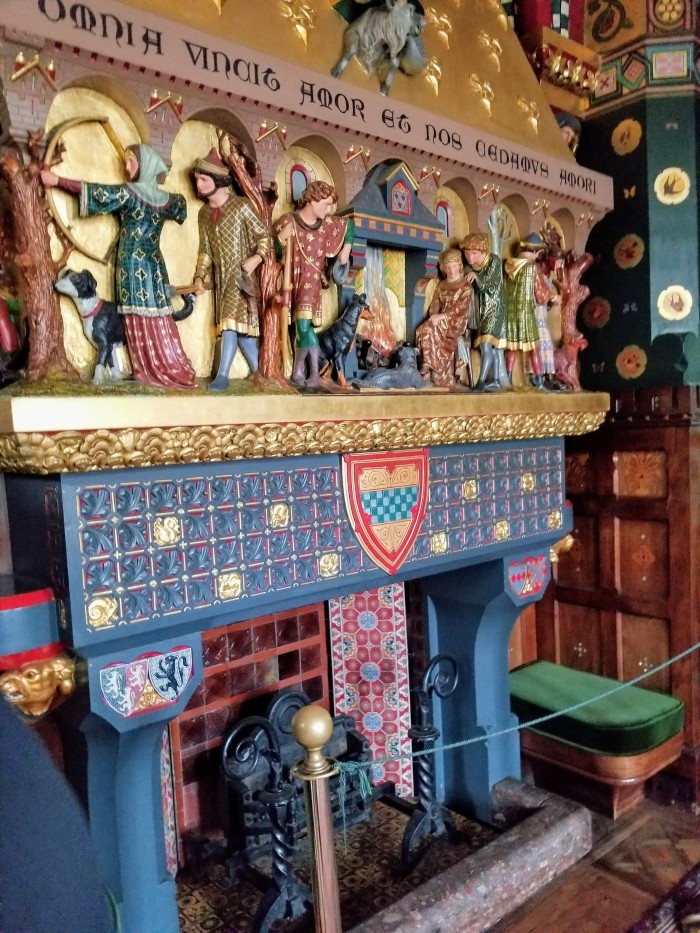 It’s definitely got dragon wings, but is that a dog’s head…?  Hmm.

Next we continued into the Children’s Nursery.  Along the upper part of the walls encircling the room were illustrations of many children’s tales, and right above the fireplace, we found St. George and the Dragon: 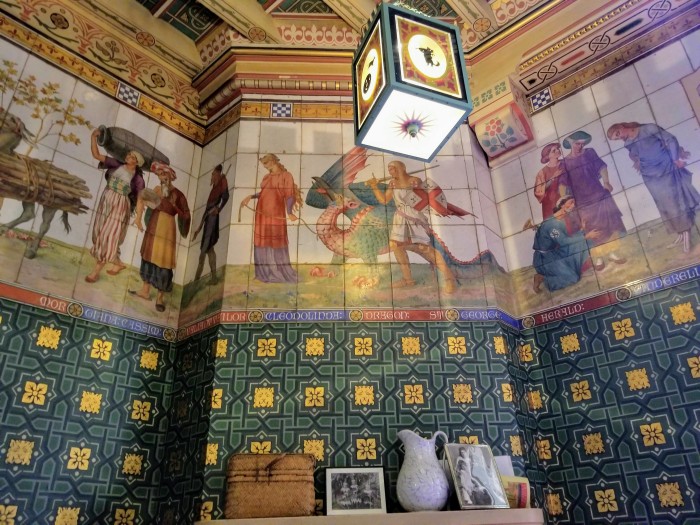 Once again, I can see the resemblence, but I think they’re interpreting ‘dragon’ a little bit differently than I usually do…

Then we entered the banquet hall with this beautiful high ceiling, and up on the wall above the doors at the end of the room was a little dragon decoration:

Must be related to the dragon from the Winter Smoking Room…

Look as we might, the next few stops — first at the Lord’s chambers (complete with very modern washroom) and then at the rooftop garden — were dragon-less.  I was starting to think I would only find these initial three when the tour group found something… interesting… in the Small Dining Room with the beautiful ceiling, on the side of the grand fireplace adorned with angels:

I’m not sure what this is supposed to be… a griffin?  A chimera?  Some other kind of monster?  But the folks I had enlisted to help me find dragons insisted this was indeed a dragon, so I’m including it for them. 🙂  Let me know what you think in the comments!

We finally got back to true dragons in one of the many heraldic shields along the ceiling in the library, although lions were far more popular in the crests.  The one we found put me in mind of a certain movie, however…

Uther… perhaps related to Arthur, son of Uther Pendragon, from the castle of Camelot, King of the Britons, defeater of the Saxons, Sovereign of all England?  😉  (I couldn’t help it!)

After our tour of the Castle Apartments was finished, we ventured across the courtyard and up the perilous climb to the top of the Norman Keep (so many stairs, and very steep!) where I captured the lovely picture of the Welsh flag above.  I also got this selfie of my husband and I under the flag, with the Castle Apartments behind us. 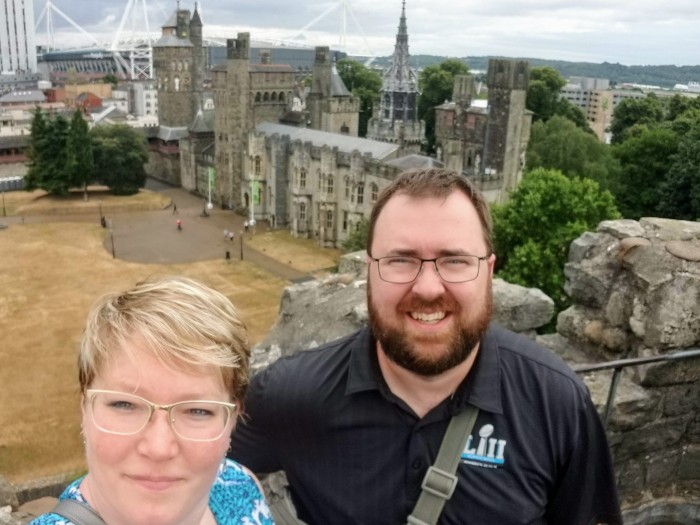 We’re squinting because it was bright and sunny during our whole trip — definitely not the British Isles summer vacation we were expecting!

Then of course, I had to hit the gift shop, because my husband and I always pick up a fridge magnet for the places we visit — we’re going to need a whole new fridge for the collection we brought home from this trip! — and that was when I finally found lots of Red Welsh Dragons, and even brought one home for my very own. 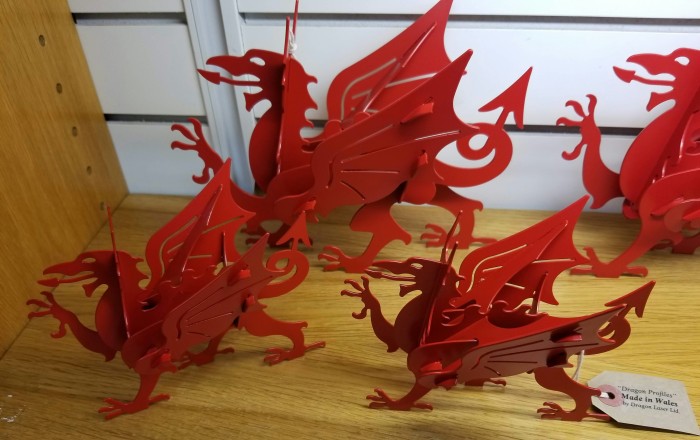 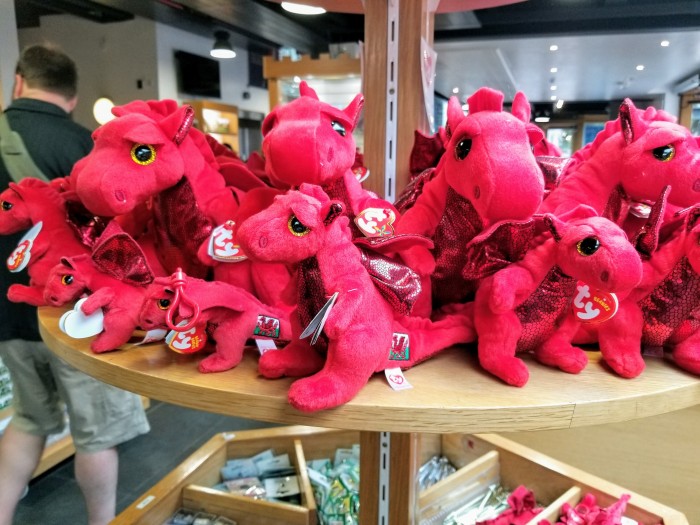 I got one of the small keychain-sized dragons to remember our visit.  I wonder if all of these plush Ty dragons are sad because they’re not better represented in their own castle?

So that was Cardiff Castle!  I hope you enjoyed my snapshots.  I have one last dragon to show you, because after our day of sightseeing, of course we also had to check out the nightlife in Cardiff, and oh my gosh we were not disappointed!

Our night included a lot of wandering, some lovely LGBTQ+ bars including The Golden Cross and the Wow Bar, and really amazing drag shows where the queens sang live instead of lip synching!  I discovered that the city of Cardiff is a very welcoming LGBTQ+ place, and I can’t wait to go back some day (if only to get a better picture of this flag at Wow Bar)!

I’m finally caught up, but stay tuned for a short post later this week, and then birthstones next week!  Thanks as always for reading, take care, and stay creative!

Image credits:
All photos taken at Cardiff Castle and the Wow Bar in Cardiff, Wales, U.K. by me
Map of the British Isles from EnchantedLearning.com