I was trying to decide what to make my ‘short’ post about this week when my awesome page-a-day calendar from Atlas Obscura came to my rescue!  I’ll let Atlas Obscura contributor S.A. Zollinger, pen name pieofthemonth, tell you more (in the block text), while I add a few things from my own searching, including the photo above from the official Drachenstich Festspiele website…

Home to the oldest folk play in Germany, the picturesque medieval village of Furth im Wald, nestled in the Bavarian forest, is also home to a 15-meter-long, fire-breathing dragon.

This little village is right on the border with the Czech Republic, according to trusty Google Maps:

The Dragon Slaying Festival (Drachenstich) in the village of Furth im Wald has been performed since 1590, and since 1887 this dramatic public drama has played out during the second week of every August. The festival consists of more than a thousand locals dressed up in historical costumes, with over 250 horses, a hero knight, and his wife who needs to be rescued from a giant, fire-breathing dragon.

Here is an amazing two-minute video, found on the official site of the Drachenstich Festspiele and uploaded by YouTuber StadtFurth, showing highlights from the festival!  Yes, it’s in German, but you don’t have to understand the narration to see what an amazing time this would be!

In 2006, the old fire-breathing monster was retired and replaced by a new electronic marvel — Tradinno, a massive fire-spewing robot. According to the Guinness Book of World Records, Tradinno is the largest walking robot in the world.

Here’s an image of the dragon by Mühlbauer Andreas from the Bavarian Forest Tourist Info site — that dragon looks just amazing, no wonder it’s in Guinness!  Another site explains that the name Tradinno is meant to “emphasize the connection between ‘tradition’ and ‘innovation’.”  Neat! 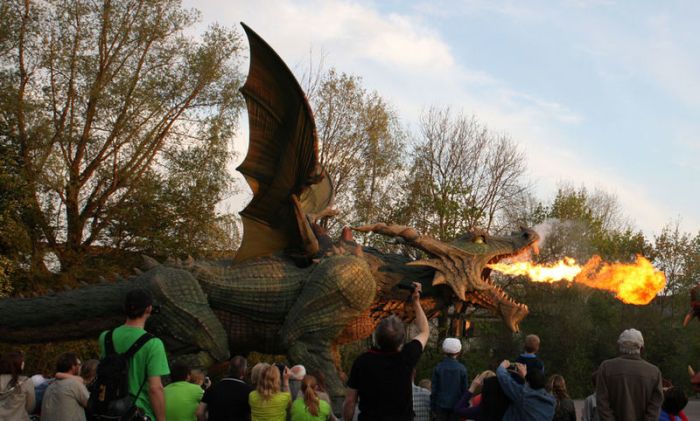 Because of this long history of dragon killing, Furth im Wald has become known as “The City of Dragons,” something that will be obvious to anyone wandering around the town. There are dragons everywhere — painted on buildings, in sculptures, on the front of the town hall, etc. If you can’t make it to Furth in August to see the festival, you can see Tradinno in his lair (the Drachenhöhle) during the summer months (between Easter and October).

This certainly sounds like a village I need to visit!  (If only I spoke any German…)  Here’s an awesome photo of a sign from the town by the author, S.A. Zollinger (pieofthemonth):

In addition, the town is home to the “First German Dragon Museum” where you can see dragon-themed memorabilia, art, historical objects, information about the Dragon Slaying Festival, and the retired fire-breathing dragon.

Here is a photo called Further Drachenstich: Gestochener Drache from Christl Stef at Wikimedia Commons that I think is of the older model of the dragon — the eye ridges are different, and it looks smaller than Tradinno, don’t you think?  Even still, it’s impressive!

Finally, here’s an awesome postage stamp from 1912 featuring the Drachenstich festival that I found through Google images — it appears to have been up for auction on Ebay long ago, I wish I’d know about this before so I could have snatched it up! 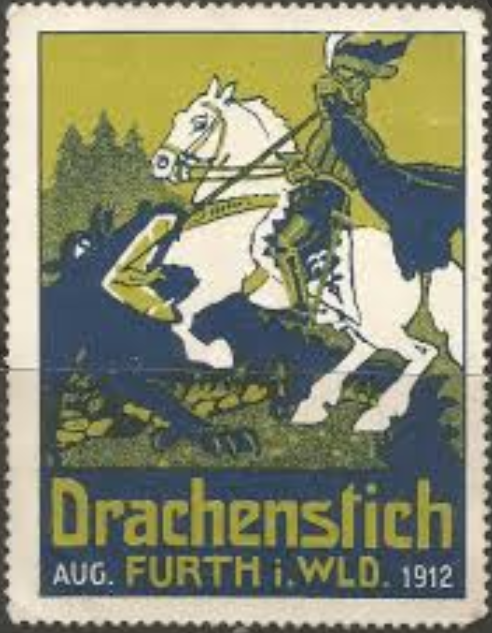 Despite my reservations about the dragon-slaying trope, I absolutely will be putting this town and this festival on my bucket list, and I can’t wait to see it in person some day.  A big thank you to S.A. Zollinger (pieofthemonth) and Atlas Obscura for letting me know it existed!

But despite how cool this looks, as longtime readers may know, I much prefer the narrative that even HBO’s Game of Thrones espoused in Season 1, and artist John Nance put on items for sale in his CafePress shop: 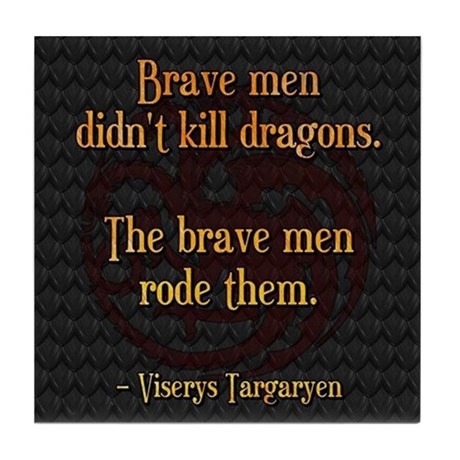 Thanks as always for reading, and come back next week for the August Birthstone Dragons!  Take care and stay creative!

* (I can’t believe that slimeball Viserys said one of my favorite lines, dangit!  Oh well.)