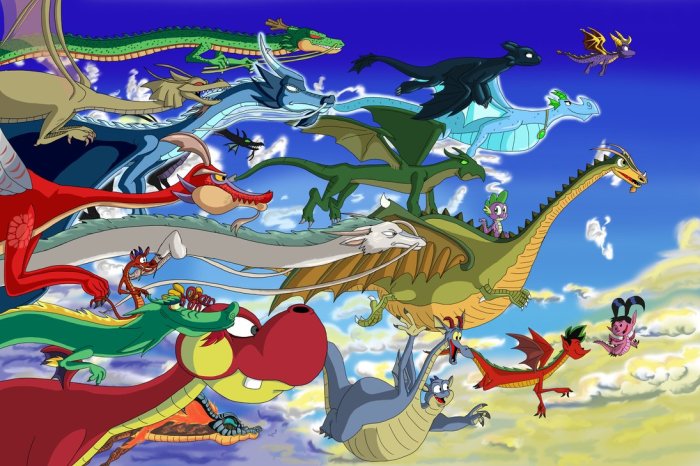 I’ve decided to tackle the April AtoZ Challenge again, and as my theme this year, I’m going more in-depth than simply “dragons.”  Specifically, I’ll be focusing on:

Dragons in Our Fandoms

Examples of dragons in literature, film, television, anime, and video games.  From “Avatar: The Last Airbender” to the “Zelda” video game franchise, I’ll take a look at many forms of popular entertainment and how dragons have been represented over the years, and I’ll feature art from the source material as well as fanart and other media by multiple artists in each post, rather than focusing on one artist each day.

Last year, when I was just jumping into in this blogging adventure, I followed the alphabetical theme in a fairly random fashion, posting any art that caught my fancy as long as it matched that days’ letter, and then featuring additional art by the same artist in the same way I do for my regular blog posts.

This year, I’m being more selective as I plan out the month, focusing on the dragons that play both major and minor roles in the entertainment we love.

I was very lucky to find the perfect image for today’s announcement — above is The Flight of Dragons by deviantartist Sara, posting as ssstawa.  According to Sara’s caption, you can find all of these dragons in her piece, a great cross-section from many fandoms (and some I expect to feature myself for this challenge!):

Shen Long from Dragonball/Z
Dragon from The Page Master
Blue Dragon from Avatar: The Last Air Bender
Maleficent from Sleeping Beauty
Valoo from The Legend Of Zelda: Wind Waker
Haku from Spirited Away
Mushu from Mulan
Dojo from Xiaolin Showdown
Hooktail from Paper Mario: The Thousand Year Old Door
Volvagia from The Legend Of Zelda: Ocarina Of Time
Toothless from How To Train Your Dragon
Spyro from Spyro
Princess Dorathea from Danny Phantom
Alien Dragon from Ben 10 Ultimate Alien
Spike from My Little Pony: Friendship Is Magic
Gorbash from The Flight Of Dragons
Devon and Cornwall from Quest For Camelot
Jake and Haley from American Dragon

This very ambitious picture only took Sara three days to create, and I am excited for her to be my first feature in this year’s challenge.  Check out Sara’s “mostly fanart” deviantart gallery, and also her Tumblr for more fun stuff.

I hope you join me on this crazy April adventure, and if you’re particpating yourself, be sure to leave me a comment with a link to your blog so I can check out your theme post in return!  One of the best things about this event is discovering the work of other bloggers, and I found many blogs last year that I still follow to this day.

Look for my first post for A on Saturday, April 1!  This challenge doesn’t require posts on Sundays, however, so my second post for B will be on Monday, April 3.  I’m hoping they will publish about the same time every day, at 9:05 a.m. CST, so I hope you tune in!

As always, thanks for reading, take care, and stay creative!

Image credits:
The Flight of Dragons by ssstawa
Blogging from AtoZ 2017 Banners from the Official Website

13 thoughts on “Theme Reveal for the April 2017 AtoZ Challenge, with Flight of Dragons by ssstawa”