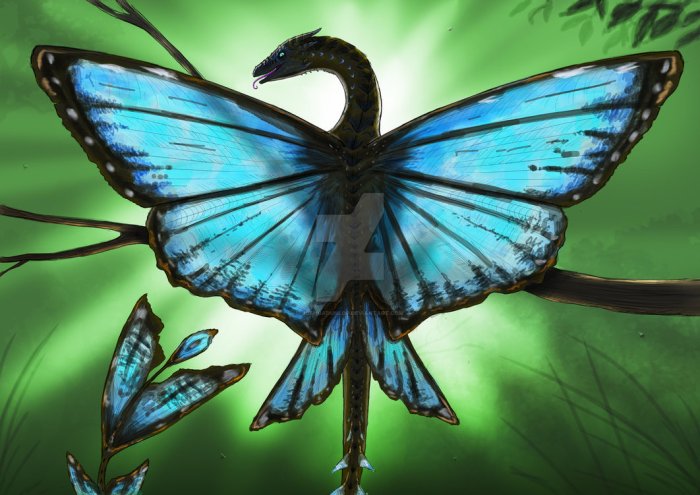 Happy Birthday to all my September-born readers!  We have a very blue lineup this month since your birthstone is the sapphire, starting with this gorgeous piece called Wings of Sapphire by U.K. professional artist Joshua Dunlop.  He captions this “The Congo Sapphire-Winged Dragon.  They live in the thick rainforest of the Congo and are rarely seen. … They range from the size of a butterfly to a raven.”  I fell in love with Josh’s artwork when I saw this, but then I discovered another reason to add him to my favorites — he has a series of realistic Pokemon he’s posting on DA and also Patreon!  (His Meowth is the cutest thing ever!)  Be sure to check out his gallery, and follow him on Facebook, Twitter, and Instagram for more.

Now getting back to the birthstone, from the Wiki:

Sapphire is … a variety of the mineral corundum, … typically blue, but natural “fancy” sapphires also occur in yellow, purple, orange, and green colors; “parti sapphires” show two or more colors. The only color that sapphire cannot be is red – as red colored corundum is called ruby, another corundum variety.

The 423-carat (84.6 g) Logan sapphire in the National Museum of Natural History, in Washington, D.C., is one of the largest faceted gem-quality blue sapphires in existence.

Then showing off a really brilliant blue color is this Sapphire Dragon by Canadian professional artist Jen Elliott, posting as jocarra.  This is another dragon from her work with Endless Realms, a “cutting edge pen-and-paper RPG” that lets you “tell your tale with story-driven gameplay mechanics.”  Jen captions this, “I wanted at least one particularly feminine-looking dragon for this batch — I chose sapphire.  I can’t help but sort of imagine her being mated to the Ruby Dragon“ [that of course I posted in July here]. 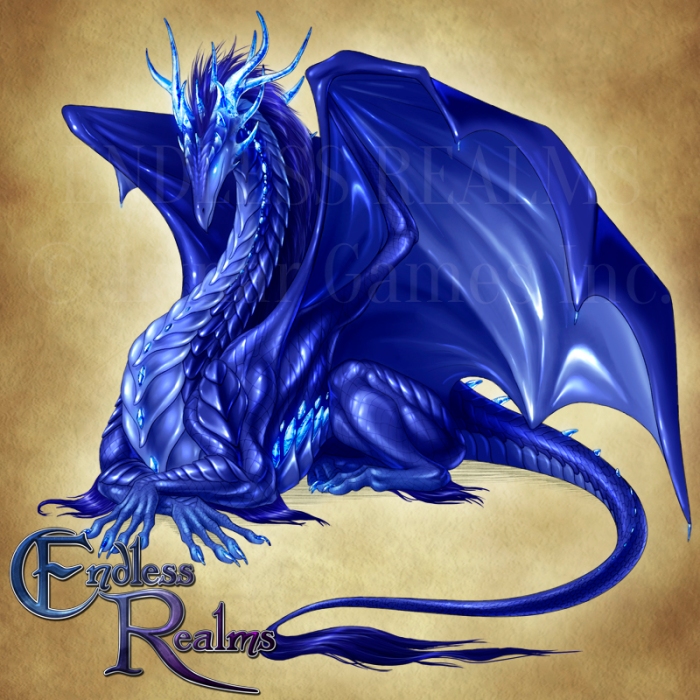 Then once again, I have to show you the cuteness of the September Dragon created by the awesome American artist and crafter Amaze-ing Hats.  Someday I will own one (or, more likely, many) of these adorable creations, but for now, check out her gallery and order your very own customized dragon at her website. 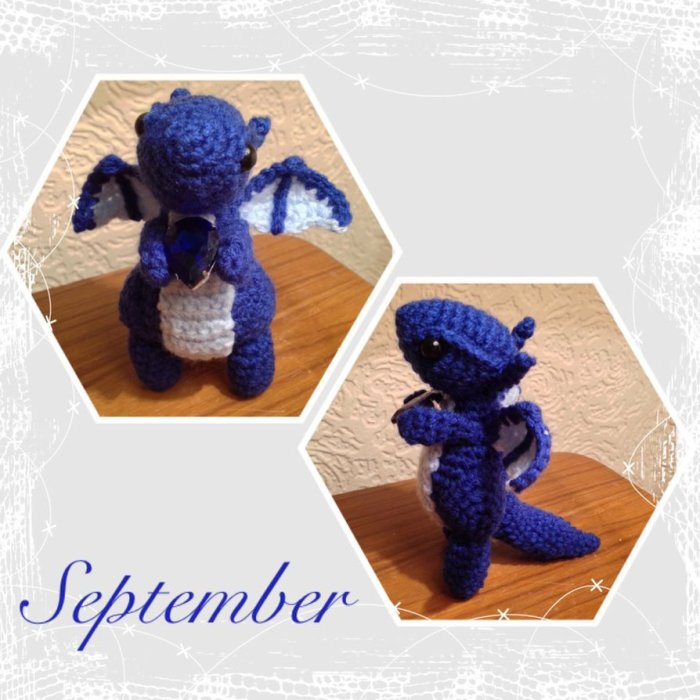 I loved finding this next piece by a new-to-my-site artist because the dragon is really well done, and also the lovely orange of the fire breaks up all the blue we’ve seen so far!  This is Sapphire by Polish deviantartist Ithlini Ellyan Senah, and from what Google Translate tells me about the comments, this is an image of Saphira from the Eragon/Inheritance Cycle book series.  Ithlini’s gallery is amazing and includes all sorts of original work and fanart, including Hamilton (yes really!), so go check it out! Then we go back to deep, dark blue with this Sapphire dragon by professional artist Candice C. Sciortino, who posts as Mythka (and was purchased by uber-blue-dragon).  This one is from her June 2016 Gemstones themed set, but as I always mention, this crazy artist has posted every day for many years and has a gallery of over 1600 designs, mostly daily dragons!  You can check out her latest series, the Monster Field Guide 2018, and follow her on Facebook, Instagram, YouTube, and Twitter for more. 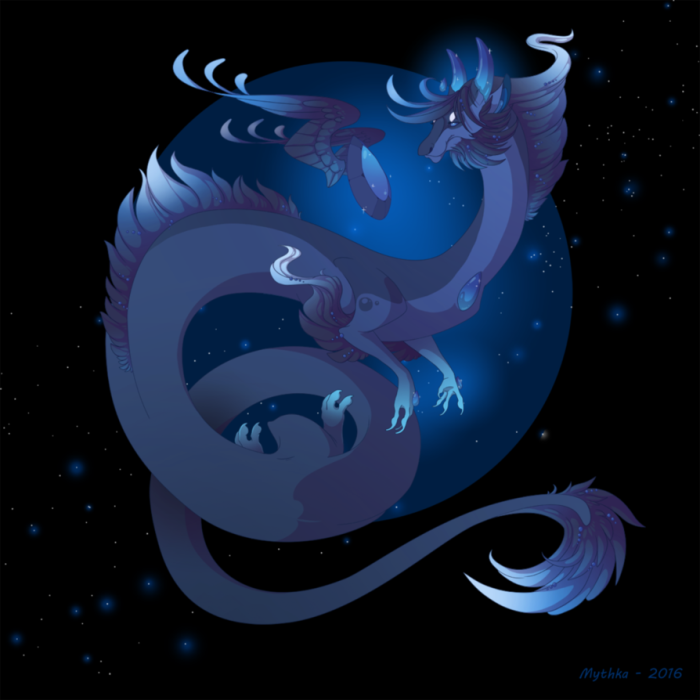 While lately I’ve been trying to feature four regular artists and four new talents in the birthstone posts, I’m calling this next one ‘new’ since I’ve only shared him once before (during AtoZ 2018).  This is Soaring into Sapphire by American deviantartist Muzafr Ayyub, posting as TwilightSaint, a Navy fighter pilot that has painted thousands of commission portraits, such as this one made for a fellow artist.  Check out his gallery, and follow him on Facebook, Twitter, Tumblr, and even more places in his bio!   He captions this one (and I totally agree):

Gradient-shading commission for Blue443 of his character Blue Hasia…  So… I really think that this is one of my best pieces to date. I love the pose, I love the blue, I love those wings… those feets. Those wings, the shading, the wings, the colours. Did I mention the wings? 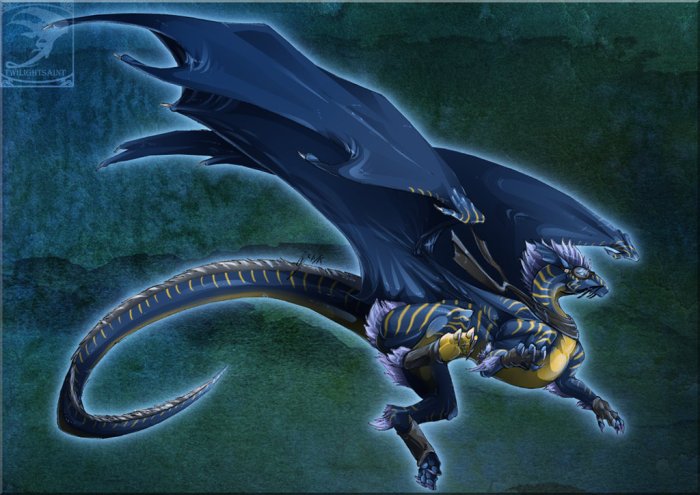 Then we have Sapphire Heart Dragon by American deviantartist Britney Pringle, an actually new-to-me artist but one I’ll likely feature again because she has a lovely fantasy gallery and portfolio at her website.  About this one, she writes, “Dragons are my favorite fantasy creature and sapphire is my birthstone.”  Well then, your dragon is perfect for this post! 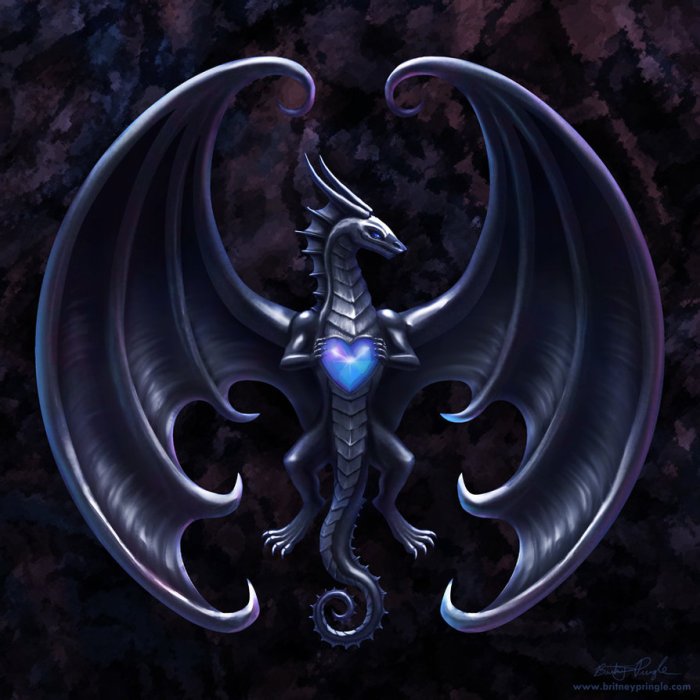 And finally, we have another piece of the Stitch-a-Long called Dragon Birthstone SAL – September/Sapphire that American artist and crafter Gayle Tominaga, posting as jijikit, created from a 2017 Mystery “Stitch-a-Long” pattern by Brittany Church of InglesideImaginarium.  Gayle’s caption is below describing this interesting ‘dragon,’ and you can check out more artwork in her gallery! 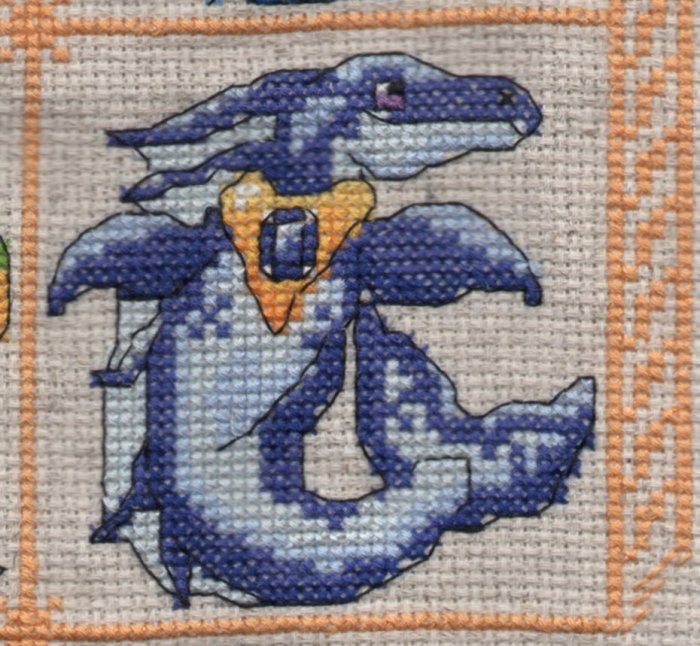 This one is a “Taniwha”, a type of deity-like creature from Maori mythology of New Zealand.  I had never heard of this kind of dragon before.  The designer says they can be a protector or predator.  They are able to take on different appearances and usually make the ocean their home.  In the sea, they most often appear as a whale-like creature but, depending on the Taniwha, they have formed relationships with particular tribes and have even married their human members!  WOW!

As for my own cross stitch endeavour that I mentioned last month… I started working on it out at the Renaissance Fest and I haven’t gotten very far yet, but I’ll keep you posted… 🙂 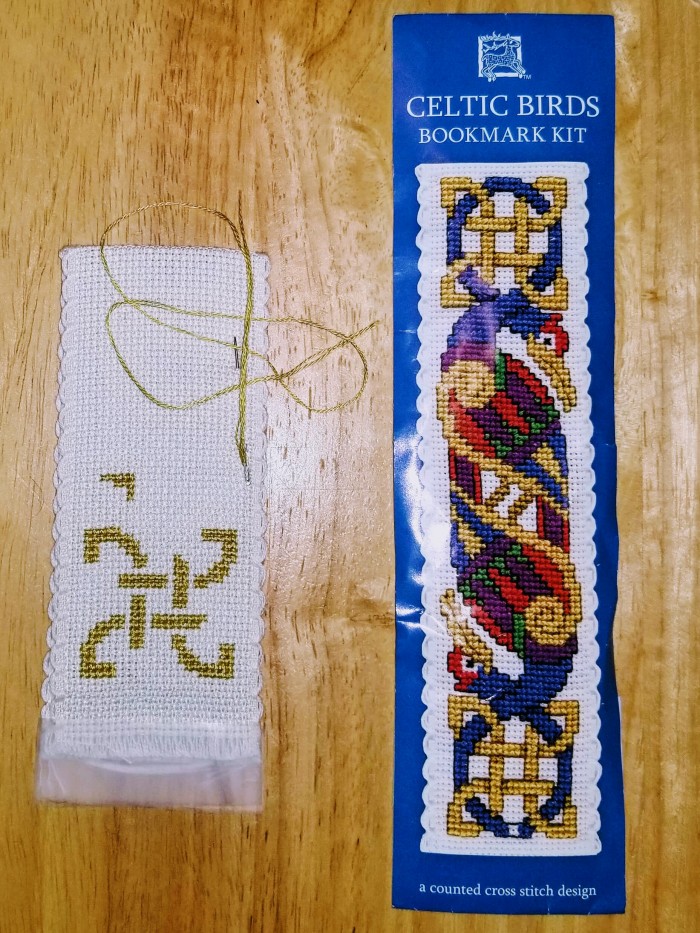 I totally blame Gayle Tominaga (jijikit) for adding this to my already full plate!  But also I hadn’t done cross stitch in a long while, and now I remember why I loved this craft so much, so I guess I should also thank her for putting the bug back in my brain, and getting me to purchase these bookmark kits while we were in Scotland.

Anyway, that brings us to the end of another month’s birthstones!  Stay tuned for a short post next week (during which I’m also supposed to try to write an island in my novel Finding Dragons!) and then instead of a Writing Thoughts post, I’m planning a special feature for the last week of September!

Thank you as always for reading, take care, and stay creative!