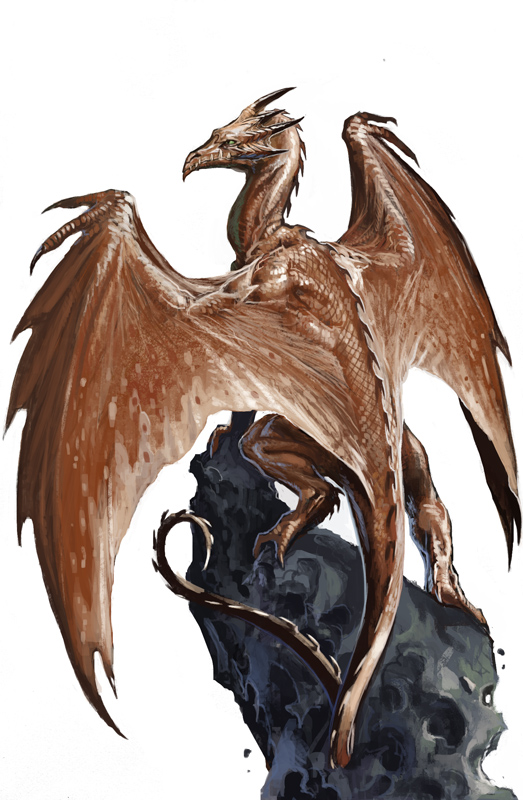 Funny story — I finished my ‘problematic’ Writing Thoughts article earlier this week while sitting at one of my usual haunts in downtown Minneapolis, and just a few blocks away the megastar rock band Metallica was taking the stage at the Target Center.

And as I browsed for ideas for this week’s short post, I happened to come across an old favorite of mine, Kiwi professional artist Ben Wootten and his young metallic dragons.  Kismet, right?  😉

So above we have what I think is the cutest of the three, his Young Copper Dragon created for the Pazio Pathfinder RPG.  Brass dragons have always been my favorite, but the chaotic good Copper dragons, described at the Pathfinder Wiki as “more whimsical than most other dragons,” are a close second!

Then next, here is the more regal Young Gold Dragon.  Ben really has a way with the different wing styles on these dragons and their overall distinctive bodies and faces!  Gold dragons are lawful good and are the “pinnacle of metallic dragonkind,” according to the Wiki.

And finally, here is his Young Bronze Dragon.  It’s a good thing metallic dragons are usually nice — even though they’re young, they’re still classified as Large creatures, and those teeth and talons look pretty deadly!  Bronze dragons are also lawful good, and the Wiki uses Ben’s adult Bronze dragon for their example image.  It describes them as “usually found near temperate coastlines, befitting their mastery of water,” and I love the colors he uses to evoke that synergy!

Ben captions each of these as “a wee piece I did for the new Pathfinder Roleplaying Game Bestiary Box to be released this Aug [2013], a box full of beasties to colour up your table top, something nice to look at while your characters are mauled before been eaten.”

As I said, metallic dragons are usually the good guys in this RPG, but never fear — if you want to get eaten, Ben has also created young versions of the chromatic dragons, and also adult and ancient versions of all of the types!  Check out his gallery and his portfolio website for more dragons and other fantasy artwork, and also the other times I’ve featured his dragons here.

Short post accomplished (and on time)!  Thanks as always for reading, see you next week for the September Birthstones, and take care and stay creative!