Earlier this week was the fifth of November, and it inspired me to feature images of fire creating the shapes of dragons alongside the famous poem this week.  (Most of the photographers I’ve chosen promise these haven’t been edited, but you can be the judge.)  This first entry is called Smaug the Dragon by U.K. photographer Eilidh, posting as ParisPaperStars.  Check out her gallery for more.

According to the scholarly site PoemOfTheWeek.org, founded in 1996 and active until 2011, the various versions of this English folk verse “celebrate the foiling of (Catholic) Guy Fawkes’s attempt to blow up (Protestant controlled) England’s House of Parliament on November 5th, 1605. Known variously as Guy Fawkes Day, Gunpowder Treason Day, and Fireworks Night, the November 5th celebrations in some time periods included the burning of the [either the] Pope or Guy Fawkes in effigy.”

I’ve also heard it called Bonfire Night, and here is Bonfire Dragon by American photographer Rick, posting as Artie3D.  Check out his eclectic gallery for more.

Guy Fawkes and his companions
Did the scheme contrive,
To blow the King and Parliament
All up alive. 1

This next one looks like a smirking dragon to me, perhaps scheming himself?  I love the liquid look of the flames in this piece called Karyuu by Philippino photographer Gerard R. Gudes, posting as rardstar.  A fan asked him in the comments how to take picture of fire, and he answered, “Just make a fast shutter. Even at night fires can be easily overexposed. Because of fast shutter speed I even hand-held this shot.”  Check out his breathtaking gallery for more — this guy is seriously talented!

Threescore barrels, laid below,
To prove old England’s overthrow.
But, by God’s providence, him they catch,
With a dark lantern, lighting a match!

I think they used threescore barrels for this next giant fire!  This one is called Ghost of Guy Fawkes by U.K. photographer Maddie J, posting as Capture-Photography.  She writes, “It looks a little like a dragon if you look closely.”  I don’t have to look that close, what do you think?  Check out her gallery for more.

A stick and a stake
For King James’s sake!
If you won’t give me one,
I’ll take two,
The better for me,
And the worse for you.

I can just hear this next dragon snickering that last line, can’t you?  This is FireDragon by American deviantartist EmeraldFalconFeather.  This artist remarks in her profile that “The Road to El Dorado is the best animated movie, without question,” so she’s definitely awesome, so check out her gallery for more.

A rope, a rope, to hang the Pope,
A penn’orth of cheese to choke him,
A pint of beer to wash it down,
And a jolly good fire to burn him.

This next jolly good fire is called Fire Dragon by Dutch deviantartist shy-fox, who used to post as Lottjuh.  She writes, “I was at Castlefest in Lisse (Netherlands) and there was a bonfire… I took this picture and saw it looked like a fire dragon… or something, you could also see a fire bird or a fire pegasus or maybe you even see something else…”  I definitely see the dragon!  Check out her gallery for more. 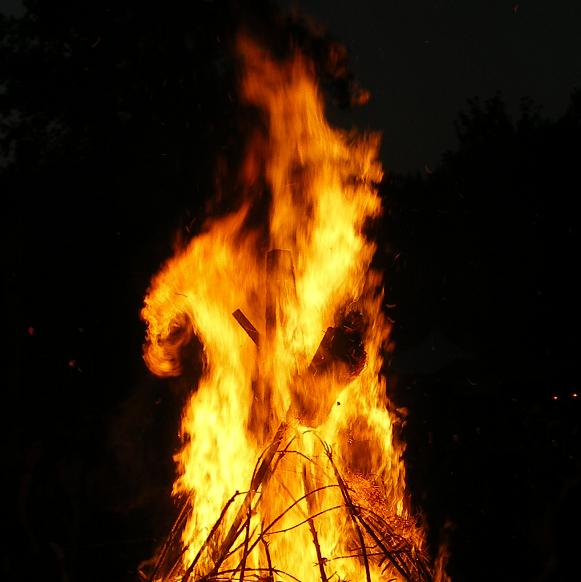 And I’ve left the most enigmatic for last — here is Dragon Fire by American deviantartist Kellee, posting as Some-Punk-Next-Door (great name!).  She writes, “There’s a dragon!  Do you see him?”  I almost didn’t include this one, because I wasn’t sure I could see him myself, but the more I look at this photo, I think maybe…?  What do you think, let me know in the comments!  And be sure to check out Kellee’s gallery, which includes amazing photos and some great Harry Potter fanart!

All right, another multi-artist post that took longer to publish than I’d originally hoped, but that’s all right!  If you’re reading from anywhere that’s gotten as cold as Minnesota has this last week (we had a high temp of 26 degrees today!), I hope all the fire pictures helped to keep you warm!

Thanks for reading, and as always, take care and stay creative!!

P.S., I’ve created a new page in the menu bar called Random Writings, where I gathered the handful of original short works I’ve published over the years, so check it out if you have a chance! 🙂