P is for Pete’s Dragon

Back to Disney in the April 2017 AtoZ Challenge — and this time we get two movies for the price of one!  Let’s take a look at Pete’s Dragon, both the original 1977 version, and the recent 2016 remake.

That is an epic design by a favorite creator of mine, U.K. professional artist Andy Fairhurst, who created this imagining of the 2016 Pete’s Dragon for Disney and Regal Entertainment as one of a set of collectible tickets.  You can see the rest at that link, check out the amazing poster he’s just done for the upcoming Disney Nature film Born in China, and just see more awesomeness in his gallery.

Next, check out the Disney movie cover art boxes for the two films, side by side:

The Wikipedia page for the original Pete’s Dragon reads:

Pete’s Dragon is a 1977 American live-action animated musical fantasy comedy film … [that] revolves around an orphaned boy raised by an abusive hillbilly family who is friends with a dragon named Elliot.

However, Disney changed things up a bit in the new remake, according to that Wikipedia page:

Pete’s Dragon is a 2016 American fantasy comedy-drama adventure film … [that] tells the story of an orphaned feral boy who befriends a dragon in the Pacific Northwest, and the ensuing repercussions of their discovery by the town’s local residents.

Both films have heartwarming stories, so I’ll let you go see them for yourselves and I won’t go into the whole synopsis of each here.  Let’s just take a look at some of the art, shall we?  I’m going to share three in the original movie style, and three from the remake.  (Spoiler alert — there’s a lot of cuteness coming up.)

This first one is called The Boy with the Dragon by American deviantartist MistyTang.  One of the commentor’s noted that this movie was the original “How to Train Your Dragon,” and they might be right!  🙂  MistyTang is collaborating with fellow artists Zimeta and ratscout on an amazing web comic book series called The Chronicles of Dru that you should really check out, as well as the rest of her gallery.

Next is I swear I saw a dragon… by French deviantartist Pendalune, inspired by the movie and the songs, and done in a children’s illustration style.  Pendalune also collaborates on a webcomic series (in French) called Les chroniques de Maindish that you can check out, and see more in her gallery as well.

Last in the classic series, here is Pete’s Dragon, with the title pair next to a lighthouse, where a lot of the action in the first movie takes place, and done in the unique style of French professional artist Coralie Vallageas, posting as cosmococo.  Be sure the check out her gallery or her website, where she posts “cool art for cool kids.” 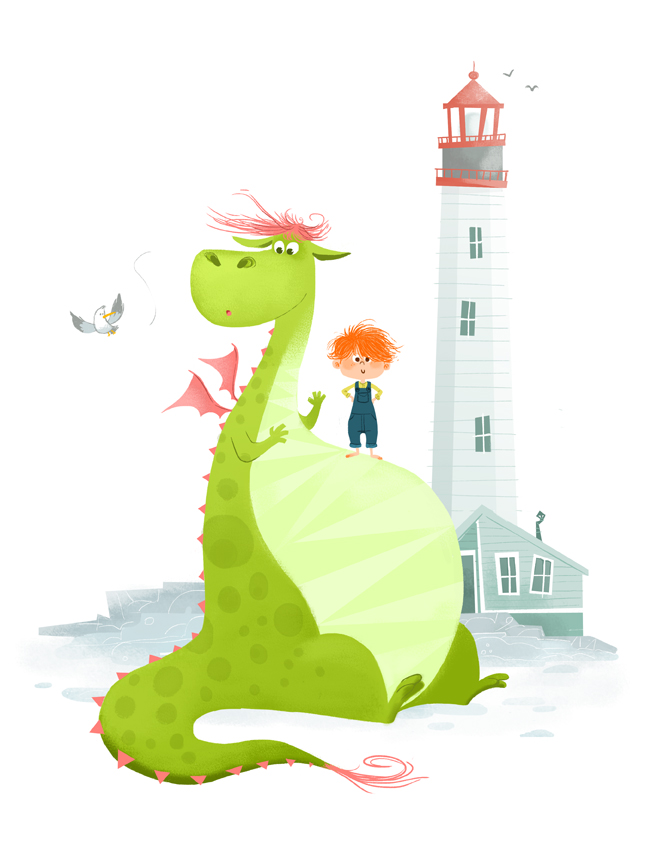 Next, let’s shift gears and check out some of the fanart from the 2016 movie.  I admit, I haven’t seen it yet (though I’ve read the synopsis and it looks cute) — I think the images of a “furry dragon” from the trailers turned me off a little bit.

Here is a really nice drawing of that fur in Pete’s Dragon by Brazilian deviantartist Amanda Scopel, posting as Amand4.  I don’t know… Amanda’s take looks cute enough, but I can’t think of any other instances of fur-covered dragons, can you?  Check out Amanda’s gallery for more.

Next is an adorably protective Pete’s Dragon with an equally grumpy looking Pete, done by American deviantartist Tony, posting as cartoonstudy.  He decided not to go the furry route — in fact, this Elliot looks more like a dinosaur, I think, but it’s still cute!  Check out Tony’s gallery for some interesting coloring pages and other art.

Next is another image of Pete’s Dragon Fanart that makes Elliot look fuzzy, but in a way I really like — and the little dozing Pete is cute too.  This is by American deviantartist Jessica, posting as CherokeeTG.  Check out her gallery for more.

Finally, the very talented violinist and Youtube sensation Lindsey Stirling had a hand in the 2016 movie, performing on the lead single “Something Wild” by Lindsey Stirling featuring Andrew McMahon (see the video at that link), and also collaborating on the score of the movie.

I found this short featurette of Lindsey and score composer Daniel Hart that shows many scenes from the 2016 Pete’s Dragon, where Lindsey explains her thoughts while composing, “If [Pete’s] soul were singing through a violin right now, what would it be saying?”  Enjoy.

All right, another letter in the books, but there are still so many left to go!  Thank you as always for reading and following my AtoZ Challenge, and please come back tomorrow for “Q” and another dragon from an animated movie, though this time it’s not by Disney!  Take care!