O is for Ōkami

Another video game arrives in the April 2017 AtoZ Challenge!  This time, we’ll look at Ōkami, a beautiful game that won IGN’s 2006 Game of the Year.

This is Ōkami – Yamata no Orochi, a lovely interpretation of the prologue of the game by Dutch deviantartist Caroline Lahaise, posting as Vyrilien.  Go check out more of her epic gallery, and read on to learn about what Caroline has painted here.

According to the Ōkami Wiki:

Ōkami (「大神」; lit “great god”) is an action-adventure video game developed by Clover Studio and published by Capcom. It was released for Sony’s PlayStation 2 video game console in 2006 in Japan and North America, and 2007 in Europe and Australia.

Set sometime in classical Japanese history, Ōkami combines several Japanese mythology and folklore to tell the story of how the land was saved from darkness by the Shinto sun goddess named Amaterasu, who took the form of a white wolf with celestial markings covering its fur. It features a distinct sumi-e-inspired cel-shaded visual style and the Celestial Brush, a gesture-system used to perform miracles.

That is the North American box art for the game from the Ōkami wiki.  It notes that:

Ōkami has the player controlling the main character, Amaterasu, in a woodcut, watercolor style, cel-shaded environment, which looks like an animated Japanese ink-illustration (known as sumi-e) with other styles of art.

That is a depiction of the dragon-demon Orochi from Ōkami, found in the Ōkami Official Complete Works artbook released by Capcom and found on the Let’s Play archive (Ōkami #28).

While the main character of the game is the white wolf-goddess seen on the box, the dragon element of the game comes in the form of her antagonist.  As the Ōkami wiki continues:

The game is set in Nippon based on Japanese classic history, and begins with a flashback to events 100 years prior to the game’s present.

[It] describes how Shiranui, a pure white wolf, and Nagi, a swordsman, together fought the eight-headed demon Orochi [represented as a hydra-like dragon] to save Kamiki Village and the maiden Nami, Nagi’s beloved.  Shiranui and Nagi are unable to defeat Orochi, but manage to seal the demon away.

In the game’s present, Susano, a descendant of Nagi and self-proclaimed greatest warrior, breaks Orochi’s seal due to the fact that he does not believe in the legend, and Orochi escapes and curses the lands, sapping the life from every living being.

Here is a really great representation of Orochi by Taiwanese professional artist LeoKatana.  This is done in pixel art — be sure to zoom in to check out the awesome detail!  Be sure to take a peek at her gallery too, especially her super adorable Toothless.  Anyway, Leo nails the description of the dragon-demon from the Ōkami wiki, which you can read below:

Orochi is a eight headed demonic serpent of massive size. On Orochi’s back is a shrine surrounded by a garden with a giant temple bell hanging in it on a large stone pedestal.

Underneath the pedestal is a mass of writhing tails, entwined, and at the sides of the mass, sprout eight necks the size of tree trunks, and on the end of each neck is a head, wearing a samurai helmet with thick armor plating and armed with a gaping mouth covered in vicious teeth, and on the outside is lined with barbs pointing outward.

Here is another amazing image from the Ōkami artbook and the Let’s Play post showing Orochi and the devestation he brings to Nippon.  The description in the artbook itself reads:

The giant serpent defeated by Nagi and Shiranui one hundred years ago. The eight heades are well known for each having their own unique distinct elemental power. It is said that by ringing the great bell on its back, that it can manipulate the soul of an offered sacrifice.

Orochi was sealed within the Moon Cave by Nagi and his comrades, but recovered its dark powers when the treasured sword, Tsukuyomi – which acted as Orochi’s seal – was removed from its resting place. Orochi was freed from his confinement, free to threaten the land once again.

Let’s take a look at a couple more fan interpretations, shall we?  This first is called Orochi Cutout by Argentinian deviantartist naughtycal-star.  I really like the feeling of depth it has, despite being a flat drawing with cut-out parts!  You can find more of her Pokemon and plush art in her gallery, or follow her to her more active FA site.

This next one isn’t cartoony at all — this is Orochi vs Ōkami, or Orochi vs Amaterasu: The Final Showdown, by U.K. deviantartist FleetingEmber.  There are the “vicious teeth” from one of the quotes above, look out!  You can check out an earlier version of this piece in a slightly different style, and check out her gallery for even more awesome fantasy art.

This next one looks like it’s from an ancient text.  It’s called Ōkami Amaterasu versus Yamata no Orochi by French deviantartist Zibulon01.  It looks like it was drawn with ballpoint pen — I wish my doodles could be as epic at this!  But she certainly doesn’t always shy away from color, so check out her beautiful gallery for more.

This next one is very pretty, called Amaterasu Mother of Us All by American professional artist Jocelyn Ada.  She used a sumi-e brush in her paint program, even! She’s also done a beautiful Sailor Moon piece, and you can see more art in her gallery and at her Storenvy site.

And finally, one last colorful one called Ōkami – The Threat, showing Oroshi looming in the background.  This was made by French professional artist Yllya for an “art exhibition [called] Inspirit about video games.”  I love the torii gate in the center.  Check out her gallery for more. 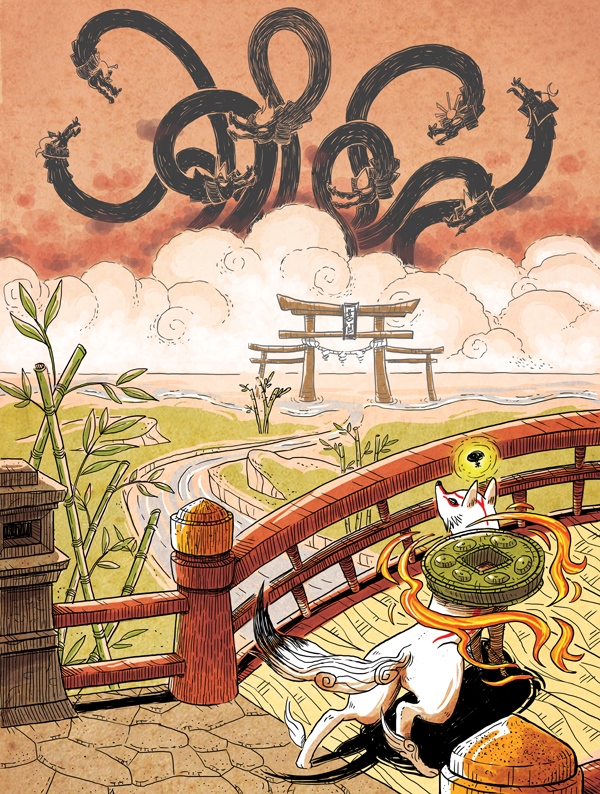 All right, it’s almost evening, but at least it’s still Tuesday, the right day for posting “O” (or, “Ō” as it were)!  I’ll admit, I considered giving up over the weekend, but I’m so enjoying this series and I’m making time to write each night to stay caught up, and hopefully get a little ahead again!

Tune in tomorrow (sometime!) as I continue AtoZ with the letter “P” and another Disney movie dragon — while the dragon I chose last year is one of my all-time favorites, I also love this year’s selection, so it should be good!  Thanks for reading, take care and stay creative!