I is for The Inheritance Cycle

We’re about a third of the way done with the April 2017 AtoZ Challenge, so let’s keep this dragon train going!  While I myself never read the Inheritance Cycle books written by Chistopher Paolini, I certainly recognize their position in the YA fandom. 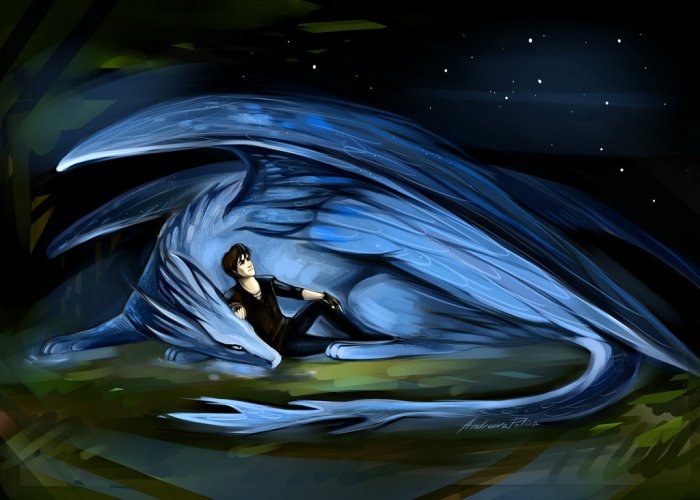 I just loved this image of Eragon and Saphira by Russian deviantartist Polina Andreeva — Saphira’s expression and the way Polina’s drawn the wings are really lovely.  Check out her gallery for more.

The Inheritance Cycle was originally known as the Inheritance Trilogy, but Paolini decided he needed a fourth book to really wrap up the story.  So, as the second book was released it was announced that the trilogy would be a tetrology, pictured below from the Alagaesia fansite.  I apologize if there are any spoilers ahead, but the books have been out for a few years now. 😉

As the Inheritance Wiki describes the series:

The series follows the exploits of Eragon, a teenage orphan who becomes the first of a new order of Dragon Riders. Eragon and his dragon, Saphira, spearhead the attempt to defeat Galbatorix, the evil king of Alagaësia, who hunted down and killed the previous generation of Dragon Riders with help from his traitor Rider allies, the Forsworn.

The wiki goes on to explain…

Inheritance has garnered much attention due to the fact that Paolini was only fifteen when he began writing the first book, Eragon.

[However,] Inheritance has also drawn a great deal of criticism from those who feel the nature of the books is derivative of other well known works of fantasy and science fiction, such as The Lord of the Rings and Star Wars.

I have to admit, I tried reading Eragon when it was first published, but I wasn’t a fan of Paolini’s writing. The summaries I’ve read since do seem very trope-filled, and even the names — Eragon, which I realized is just ‘Dragon’ with an ‘E’ instead of a ‘D’; and Saphira, ‘sapphire’ for a blue dragon — didn’t grab me.

That doesn’t mean there isn’t a wealth of beautiful fanart to share from the series, though!  Here is Soaring by American deviantartist Qiu, posting as Raaamen.  Find his gallery here.  The artist gives a great description of the scene from the end of the series:

I wanted to capture the moment when Eragon, Sapphira and Glaedor emerge through a storm into the open night sky, higher above the earth further than any other rider has flown. Eragon realizes the earth is round and the sky is empty, and also how menial the petty conflicts of men really are compared to the magnitude of the universe.

This next one is called The Dragons of Inheritance by U.K. professional artist Shaz, posting as shazy and now as shrimposaurus.  You can find their galleries here and here.  Created and posted before the release of Inheritance, I think this would make a great book cover.

Shaz captions it with “Saphira at the top, the ominous eye of Shruiken, then at the bottom (left to right) we have Thorn, Glaedr and the mysterious green dragon on the cover of the fourth book” (which is Fernin, according to a later commentor). Next is a piece that I both love, but it also gives me chills, because I can’t imagine doing this to a book, although it’s really stunning art!  Here is Eragon Book Sculpture by American deviantartist Jodi, posting as wetcanvas.  You can see more in her amazing book art gallery, and also purchase pieces from her Etsy shop! 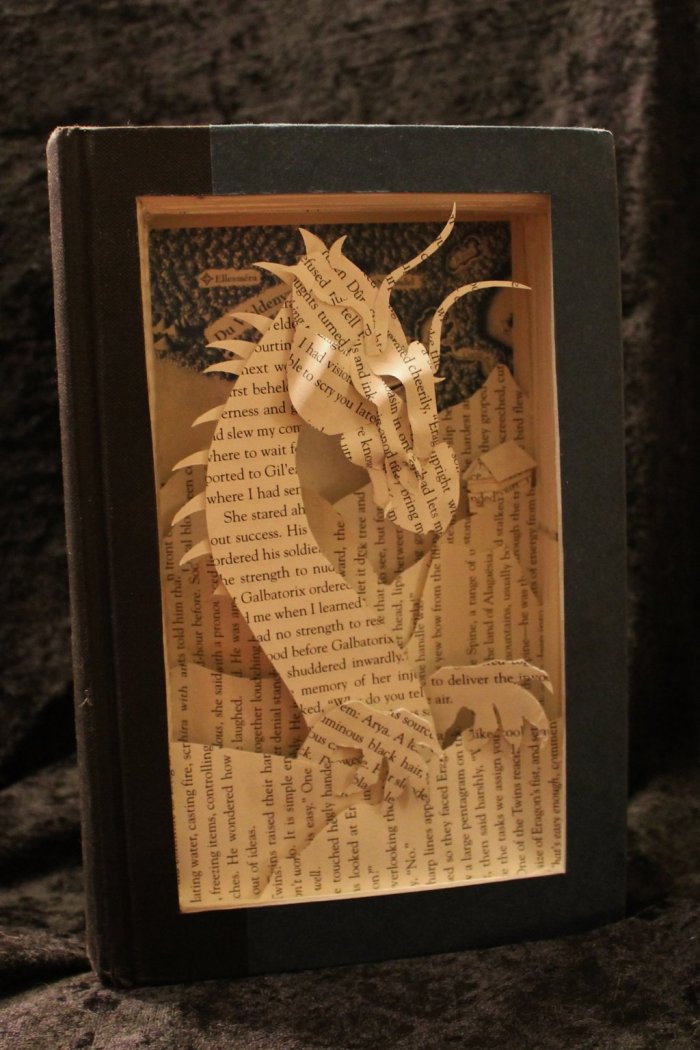 A lot of the art of Saphira showed her as a serene, happy dragon, so I was really intriged by this piece called Eragon 01 by Canadian deviantartist Alex Leung, posting as CYLex.  His gallery is here.  I don’t know what scene this is taken from, but I love the pose and the passion you can see in this dragon — I wouldn’t mess with her, that’s for sure!

Now going backwards a little bit, here is a depiction of an early scene from the first book, called Awakening by Italian deviantartist Eumenidi. You can see more in her neat animation style at her gallery.  This is showing the scene where little Saphira hatches and she and Eragon bond, and Eumenidi was nice enough to include a snippet of the text.

A smile tugged at Eragon’s lips as he looked at the small creature. Tentatively, he reached out with his right hand and touched its flank. A blast of icy energy surged into his hand and raced up his arm, burning in his veins like liquid fire. He fell back with a wild cry. An iron clang filled his ears, and he heard a soundless scream of rage.

Every part of his body seared with pain. He struggled to move, but was unable to. After what seemed like hours, warmth seeped back into his limbs, leaving them tingling. Shivering uncontrollably, he pushed himself upright. His hand was numb, his fingers paralyzed. Alarmed, he watched as the middle of his palm shimmered and formed a diffused white oval.

What struck me in this passage was the last sentence of the first paragraph… how does one “hear” a “soundless scream”?  Perhaps it was just one oversight, perhaps it’s Paolini’s youth and writing inexperience showing, but if it’s any indication of the writing in the rest of the series, I can see why some people took a pass.

That is an image from at the Inheritance Wiki of one of the posters for the big-budget movie version of Eragon, released in 2006 by Fox 2000 Pictures.  According to the Wiki, it is notable as “the last film to be released on VHS in the United States” in 2007, and also as “one of the worst reviewed films of 2006.”  The wiki goes into detail about the critiques of Eragon’s derivative story, but there was also controversy about the dragons.

Finnish deviantartist Shinon, posting as ShadeofShinon, writes in the caption of this next piece that she didn’t enjoy the movie and in fact hated the way the dragons were depicted — with feathered wings.  However, the artist in her was still compelled to create this piece in the movie style, called Bjartskular (Saphira’s Finnish name, I suspect).  Find more of her gallery here.

Shinon’s fans left comments describing a lot of the problems fans of the series had with the movie, if you feel like checking it out.  I still think the picture is good, though!

Back in 2015 there was a petition on Change.org that garnered over 56,000 signatures and was delivered to Fox 2000 Pictures to Reboot the Eragon/Inheritance Cycle film franchise, but the internet seems to have gone quiet on the matter ever since.  However, the Inheritance Wiki does talk about a fifth book coming to the series from Paolini — I guess the Eragon saga might not be over yet!

Thanks as always for reading and following my AtoZ adventure!  Tomorrow we dive back into classic mythology, so be sure to come back for more Dragons in our Fandoms!