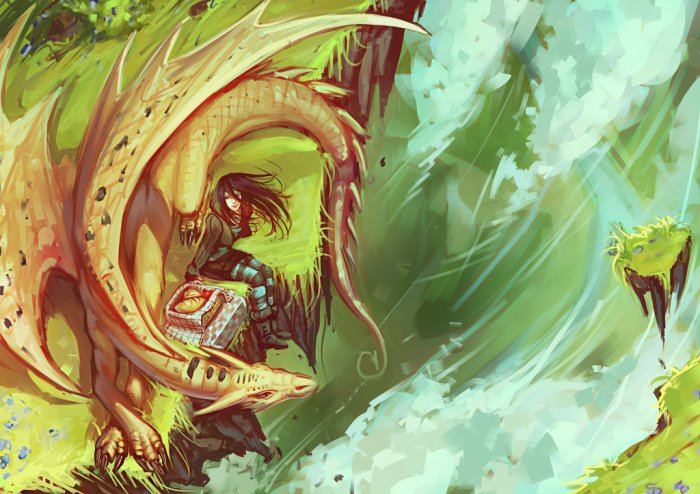 This week’s awesome artwork comes from the very talented Kiwi (New Zealander) artist Moni158.  This first one is called Sky Picnic, and Moni captions it with the note, “I love unusual/forbidden friendships.  Plus having a cool dragon friend means you can do cool stuff like have a picnic on a floating chunk [of] rock thousands of meters above the earth’s surface…” Wouldn’t that be something!  Although, I am pretty afraid of heights, so you’d never catch me sitting with my legs over the edge like that.

I have been getting a lot of behind-the-scenes blogging work done today, thanks to being stuck on jury duty, believe it or not!  Both yesterday and today, I’ve just been sitting and waiting at the courthouse instead of being at work.  I haven’t been picked for a case (or even a voir dire) yet, but I really hope I get the chance to see the American legal system in action.  Luckily, the large waiting room has tables and power outlets, and I’m allowed to have my electronic devices in here, otherwise I might need to find a place to lie down like the lady in this next painting by Moni, called simply River:

I really love how this artist captures motion in her paintings, even when the subjects are still, like with the wind in the first one, and the ripples in the water in this one and in this next, called The Wishing Pool, which features another wyrm-like dragon: 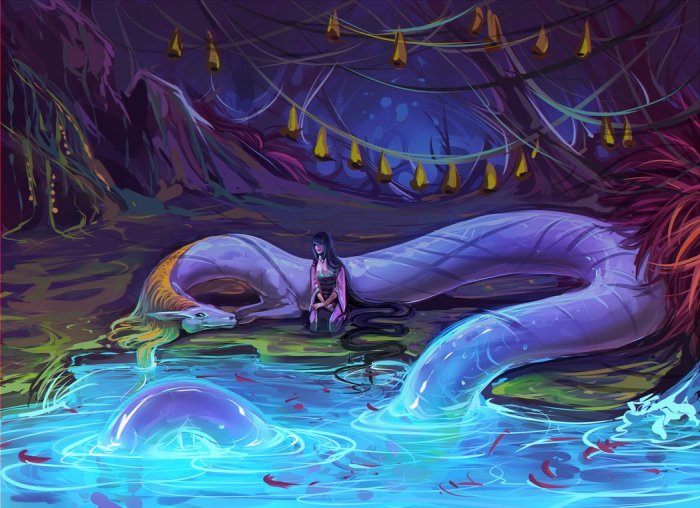 I know a lot of people here in the jury pool are wishing they could be sent home, but for me, I’m having a fine time blogging, thank you very much!  If I don’t get called for something by the end of the day Friday, my service is over, but for now I’m going to use my time as best I can.

You see, I’ve decided that I’m going to attempt the April AtoZ Challenge again this year!  Daily blogging burned me out last year, but that was because I tried to do it for a full year straight — and I wouldn’t say I did too badly, as I made it to October before I had to give up and take a break.

But one month for a challenge, with plenty of prep-time beforehand, is doable now, I think.  My April 2016 AtoZ Challenge posts are still some of my most-viewed, so I hope to dazzle you with a whole new set of dragon images based around a more focused theme this year — stay tuned for more details!

And of course, once I found this in Moni’s gallery, I had to share a bonus image today.  Here is Friendship, another beautiful image from one of my favorite fandoms — Hiccup and Toothless meeting for the first time in How to Train Your Dragon. 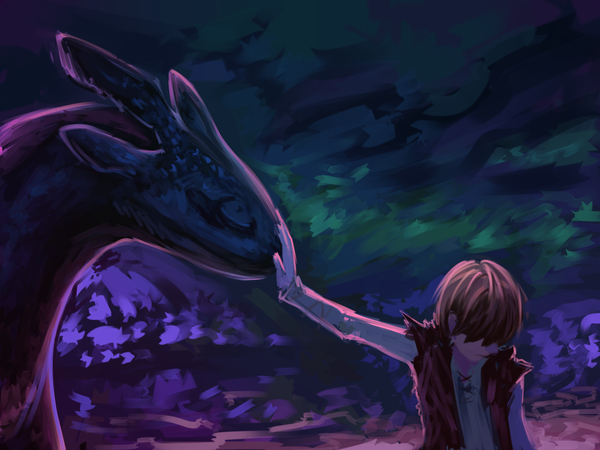 Moni has more spectacular dragons, HTTYD and other fanart, and original pieces in her deviantart gallery, and you can also find her on Tumblr, so check her out.  She’s even thinking about starting up a Patreon, which is another nice way to support an artist’s work, so look for that as well.

Okay, as always, thank you so much for reading — and be sure to give me a “like” or a “share” on Facebook or Twitter to help me get the word out about my blogging adventure too, if you feel like it, because seeing those definitely keep my spirits up.  Take care and stay creative everyone!