There is only one plot.  Things are not what they seem.

When I set out to create these writing thoughts posts each week, I usually peruse a list of quotes by well-known authors and latch on to the first one to really grab my attention that day.

Today that is exactly what happened as I read this quote by author Jim Thompson, and realized his advice might help me simplify my draft writing, and perhaps help me to get back on my writing track.

Then, I was lucky enough to find this quote already beautifully typographed in a post at the blog called Aurelia {lit} {geek} {chic}, run by the talented duo of Rebekah Montgomery and Leslie Jones.  When they shared this quote in a similar “writing thoughts” post, they captured Thompson’s bona fides this way, including links:

Jim Thompson was an American author and screenwriter known for his hardboiled crime fiction most notably The Killer Inside Me. Recently, 37 years after his death Mulholland Books reissued all 25 of his books in trade paperback. He was lesser known for his screenplay collaborations with Stanley Kubrick.

I also discovered that many people have written about Thompson’s quote, including Kim Doty back in 2013 on the blog post of self-publishing house Abbott Press.  She notes that:

Each development [in a story] serves to uncover new facts and emotions that bring the reader closer to the story’s truth. Whether it peels back the layers of a single character, a relationship, a murder or an alien planet, a good book creates an experience in which the reader walks away with a different, more intimate view of the world that was presented on the first page. The series of moments and actions that bring the reader to that final view is the story’s plot.

I really like that description and I think this quote is going to stick with me for a long while.  I’m running short on time so I’ll end it here with this cute Lion-Dragon, who’s not quite what he seems either, I’d say.  He’s done by the very talented American sculptor Becca Golins, who posts under her shop name of Dragons and Beasties.  Check out more of her work in her deviantart gallery. 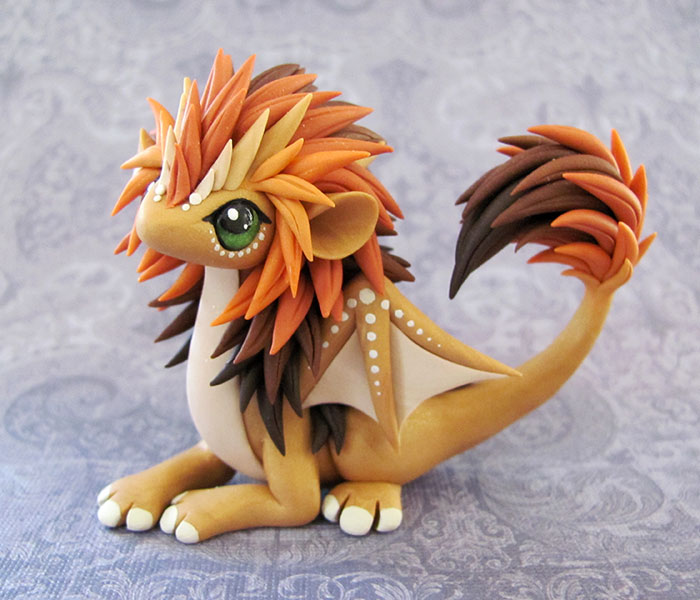 Thanks for reading, take care and stay creative!