I really loved finding this dragon reading a book today called dragon!Ford by Russian deviantartist Tiana, posting as Mistrel-Fox.  This is the dragon persona Tiana created for Ford, a normally human character from the second season of the animated show Gravity Falls, which as yet I’ve never seen but I’ve heard it’s very good.  Tiana writes that she loves how this character turned out, because he looks “badass but still a nerd.”  I feel like that would be my persona, as a dragon.  🙂

I found him by searching for Nerd Dragon, since I’m attending NerdCon: Stories 2016, a nerd and writing convention being held right in my city of Minneapolis.  There have been some great panels and I’ll write more about that in a special Saturday Writing Thoughts post, so check back for that.

Next up is a really beautiful piece by Tiana called Into a Fantasy, which features humans prominently (and that’s something I usually try to avoid on this blog), but I just really loved it.  It’s based on a very cool music video of the same name by Norwegian-Belorussian musician Alexander Rybak: 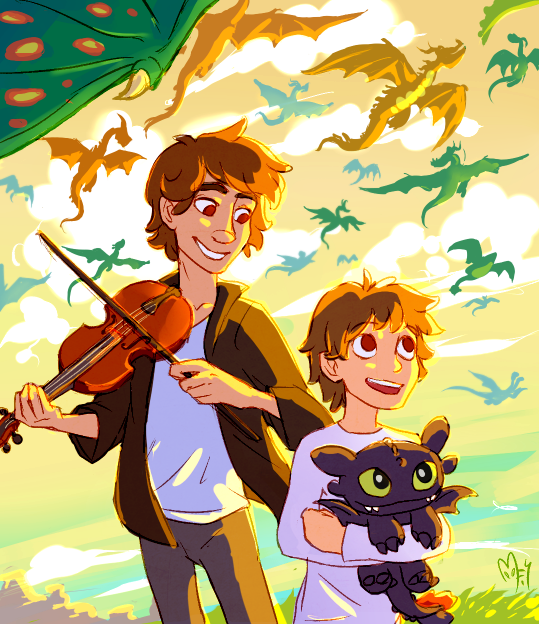 Rybak’s Into a Fantasy is from the official How to Train Your Dragon 2 soundtrack, and somehow I’d never seen it before now!  Tiana also reports that Rybak is the voice of Hiccup in the Norwegian dub of HTTYD, which is why she says the musician looks a bit like the character.  Here is the video for your enjoyment!

I’m still playing catch up, so I’ll leave you with this for now and get back to my Con, and also back to working on Saturday’s NerdCon Writing Thoughts post.  Thanks for reading, take care and stay creative!