I’ve always liked this quote, although it wasn’t until I went looking for the source that I realized most of the time, it’s a bit truncated for style.  As you can see, I’m guilty of the same thing, but it looks and sounds a bit better in the image, I think.  If Mark Twain had envisioned memes way back when, I think he would approve.

I got to thinking about the importance of the right word after reading a 2015 blog post by Judith Herman called 25 Words That Are Their Own Opposites, about contronyms in the English language.  (She has an earlier post with more examples called 14 Words That Are Their Own Opposites as well.)  I was reading blogs about writing because in my own writing, I’m still searching for the right words.  Sigh.

Here’s an ambiguous sentence for you: “Because of the agency’s oversight, the corporation’s behavior was sanctioned.” Does that mean, ‘Because the agency oversaw the company’s behavior, they imposed a penalty for some transgression’ or does it mean, ‘Because the agency was inattentive, they overlooked the misbehavior and gave it their approval by default’? We’ve stumbled into the looking-glass world of “contronyms”—words that are their own antonyms.

The posts are entertaining and informative, and definitely worth a read.  Another blog called Daily Writing Tips has a list of 75 Contronyms you can peruse as well.

A few of my favorites from these lists are Left (remaining, or departed), Screen (to present, or to conceal), Consult (to offer advice, or to obtain it), Temper (to soften, or to strengthen), and Bolt (to secure, or to flee).  Judith notes that another one I like, the phrase to fight with, has three different meanings:

“He fought with his mother-in-law” could mean “They argued,” “They served together in the war,” or “He used the old battle-ax as a weapon.”

Let me know if you’ve got any favorites, or if you know of any more!  In fact, I’d love to know if there are words in other languages that are contronyms as well, so leave me a comment below.

Here’s a pretty dragon in a lightning storm to go with Mark Twain’s quote — this is lightning strikes by German deviantartist Ferania.  She has a lot more dragons in her gallery that I may share someday as well, but I really liked the simplicity of this one. 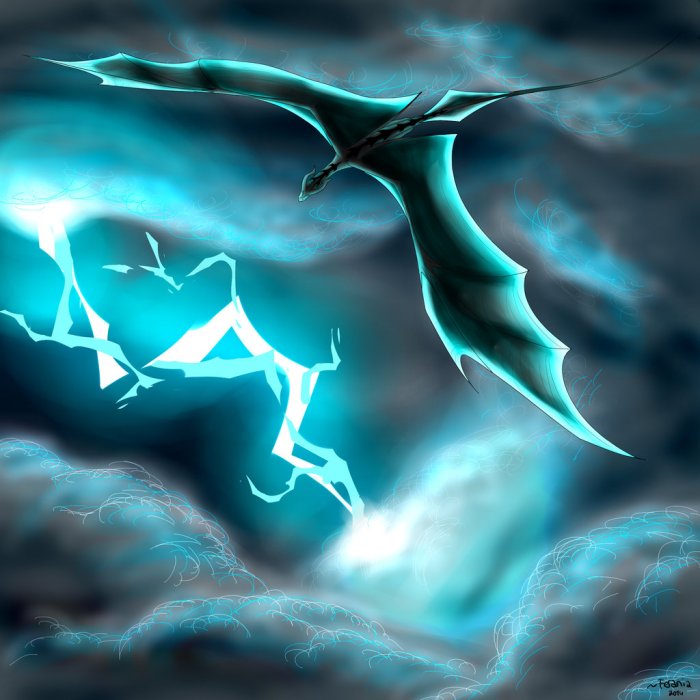 Thanks for reading, take care and stay creative everyone!

Twain Quote from Goodreads, created at PixTeller, with lightning image from Pixabay
Lightning Strikes by Ferania