Had a busy, busy day today, so this should be short and sweet tonight.  (I love vacation!!)  This is Cursed Dragon by deviantartist kaijubrainsDA, and the artist describes this cool piece as “A dragon whom is cursed to turn to red stone.”  This artist doesn’t give a lot of detail about themselves, but I’ll certainly share more from their really cool gallery in the near future.

So, I specifically looked for an image called Cursed Dragon tonight so I could nicely transition into my story about getting J.K. Rowling’s newest book last night, the highly anticipated Harry Potter and the Cursed Child.

There was a big “midnight” release party as part of our GeekyCon final night ball and festivities last night, and I have to admit some of the programming was pretty cool, but when the books that nearly the entire population of the convention had ordered still hadn’t arrived by nearly 1:00 AM, I decided to get out of the unorganized line and take my group over to the nearest Barnes & Noble to get our books instead!

I’m just about to the end of the Third Act, and of course I won’t spoil anything, but can I just say, WOW!  It’s completely not what I expected, but I’m really enjoying it so far, and I would LOVE to see the stage production.

Everyone should go out and grab a copy of this not-quite-book — it’s the stage play written out in script form, so you can either read it and picture it as the play as it’s laid out, or as you would a normal book, and I find myself going back and forth on that actually — and I can’t wait to be laying in my cabana on the beach tomorrow to finish the story.

I hope you can see the resort pool in the background of my picture!  GeekyCon finished up earlier this afternoon, and my husband and I watched the closing ceremonies and wondered if this might be our final GeekyCon.  We’ll see.

Then we picked up our rental car and drove to the Pulse nightclub just a few miles away from the convention center, where we laid some flowers at the heartbreaking memorial that’s been set up there.  I’m very glad I got to pay my respects, but it was a really emotional stop. 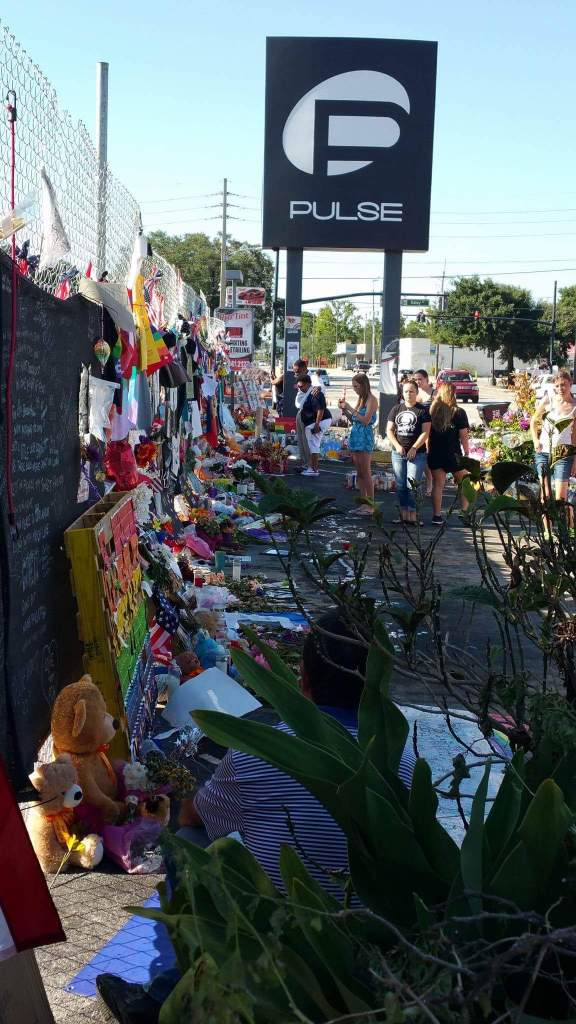 After that, we stopped at another nearby gay bar called Stonewall, in honor of the New York bar, and then we drove to Tampa and to our resort in Treasure Island.  It was already dark and it was storming something fierce as we arrived, so we haven’t gotten to check out our pool or the beach nearby yet, but it’s just about midnight now and the skies have cleared, so since the beach is “open” for another hour — I think I have somewhere else I need to be!

Thanks for reading everyone, take care and stay creative!