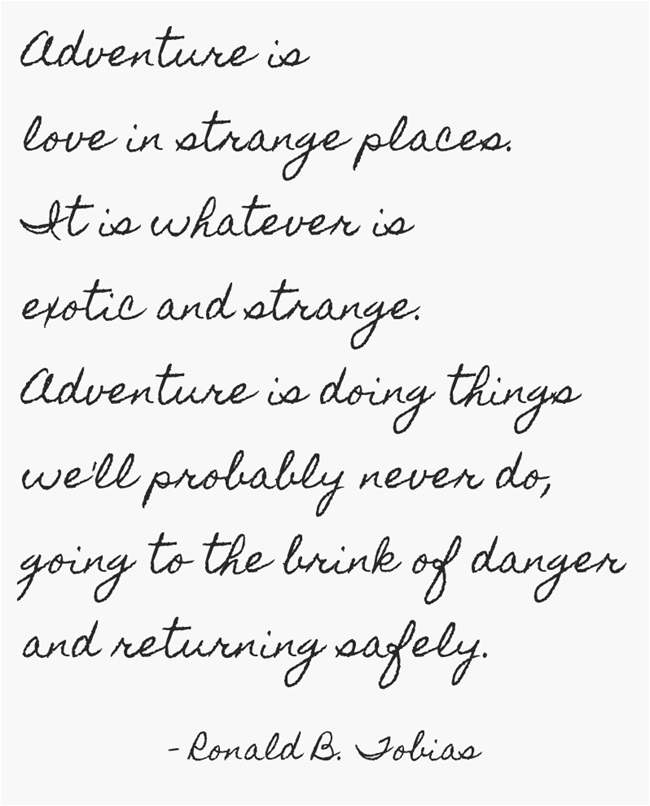 Adventure is love in strange places. It is whatever is exotic and strange. Adventure is doing things we’ll probably never do, going to the brink of danger and returning safely.

– Ronald B. Tobias, 20 Master Plots and How to Build Them

As you might imagine, while I’ve been wrestling with the current Neeka chapter and the Discovery Challenge prompt of Adventure, this topic has been on my mind a lot lately.

I know that for my novel, Finding Dragons, I’m writing a true quest, sending my characters on a Hero’s Journey where I expect deep character development and a specific milestones to occur in the traditional (if hopefully sometimes subverted) model of the epic quest story.

But this Neeka Story, which has taken on a life of it’s own — I realized the other day that I have more written for this story than I do my novel, despite the fact that I created this blog specifically to keep myself on track and accountable to keep writing my novel — Neeka was supposed to be something different.

Something fun, lighter, more action-based.  Something pretty far out of my writing comfort zone, as I try to describe a sport I know very little about (UAV racing), “pants” characters and plots completely organically instead of carefully “plotting” them out, and set in a futuristic world I’m familiar with from movies and roleplaying games, but am by no means any sort of expert in.

In other words, I think I’m trying to write an Adventure.

By Googling “Adventure Dragon” to find a dragon image to go along with this post today, I came up with this awesome Indiana Jones-inspired dragon from the Social Point mobile game DragonCity (that I will NEVER play lest I get as hooked on it as I still am on DragonVale, yeesh…), from a part called “Uncovered Hollywood Island.”

In a really interesting book on writing I picked up recently called 20 Master Plots and How to Build Them (and I’ll list the 20 below), author Ronald B. Tobias lays out the basics of the Adventure story in a way that really struck a chord with me, as it lays out the differences between a quest and an adventure.  Here’s a long excerpt, very worth reading:

The world loves a good adventure story. For the hero, it is a going out into the world; for the readers, it is a vicarious adventure to places they’ve never been, like Fez and Novosibirsk and Tierra del Fuego. It is eating dinner in a small restaurant on the Left Bank or eating Mongolian barbecue outside a yurt with a flock of sheep and goats at your side. Adventure is love in strange places. It is whatever is exotic and strange. Adventure is doing things we’ll probably never do, going to the brink of danger and returning safely.

The protagonist goes in search of fortune, and according to the dictates of adventure, fortune is never found at home, but somewhere over the rainbow. Since the purpose of the adventure is the journey, it’s not important that the hero change in any appreciable way. This isn’t a psychological story like the quest plot. What’s important is the moment at hand and the one following it. What’s important is a sense of breathlessness.

We don’t get lectures about the meaning of life and we don’t get characters who suffer from post-Modernist angst. The protagonist is perfectly fitted for the adventure: she is swept up in the event because the event is always larger than the character. The character may prevail through skill or daring but is defined by the event. Indiana Jones and Luke Skywalker and James Bond are defined by their actions in their stories.

Going into the world can mean different things. Consider Jules Verne’s Twenty Thousand Leagues Under the Sea or Jack London’s The Sea Wolf or even Daniel Defoe’s Robinson Crusoe. In these stories the world is defined variously as the bottom of the ocean; aboard the sailing ship Ghost with a tyrannical captain; or marooned on an island off the coast of South America.

The world can take many forms. What’s important about the locations is that they are anything but the mundane world we inhabit. Readers enjoy adventures as much for the places they get to go as for the action that involves the character. The world may also be an invention such as another planet, a sunken continent or the interior of the planet; or it can be pure imagination, such as the lands of Gulliver’s Travels.

Bruno Bettelheim, the Freudian analyst who interprets fairy tales, talks at great length about the child’s fear of leaving Mother’s lap and going into the world. Many fairy tales are about just that: venturing into the unknown. The adventure story for adults is nothing more than an extension of the child’s fairy tale.

– Ronald B. Tobias, excerpted from20 Master Plots and How to Build Them

Reading that description of the Adventure plot, I know that I won’t be writing a true, singularly focused adventure story — if for no other reason than that the chapter I’m writing right now, which is literally supposed to be based in adventure, is veering strangly off into Neeka’s backstory and setting up some future character development that I was certainly not expecting.  But as I’ve said before, I’m just as happy to be going on this story journey as I imagine anyone who’s reading along is, never really knowing what these characters are going to do next!

For the most part, I want to focus on the action and the plot and the setting and the “coolness” of it all, the cyberpunk and the UAV racing and the danger that I’m sure Neeka hopes is over, but that I can assure you is only just beginning.  So it’ll be part adventure, part thriller, part mystery, and maybe even a little bit of love story thrown in, if Neeka and Tolo wind up meeting again… we’ll see.

So thanks for being patient about the chapter — I promise I’m trying to get it written and posted, and I’ll have it up as soon as possible!  In the meantime, thanks for reading, take care, and stay creative!

Image credits:
Tobias quote from 20 Master Plots and How to Build Them, published by Writer’s Digest Press (2011), created on Quozia
Adventure Dragon from the DragonCity Wiki