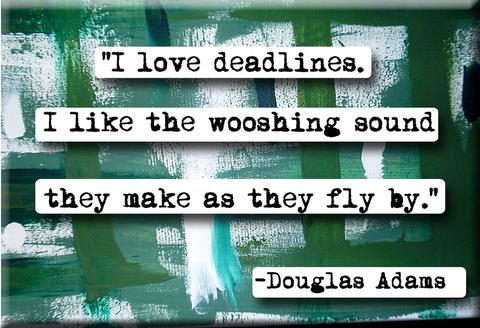 I love deadlines.  I like the wooshing sound they make as they fly by.

— Douglas Adams, author of The Hitchhiker’s Guide to the Galaxy series

Happy December everybody!  Yes, this post was meant to go out last week, before we left November, but sadly my household contracted the plague or some such nonsense and I was out of commission for days.  But it reminded me of this nice Douglas Adams quote that I can’t believe I haven’t used yet!

And speaking of deadlines, I’ve still got to get another Ren Fest post out this week!  We’ll see how I do, I have a writing day planned tomorrow… but I also just got Pokemon Ultra Sun for my Nintendo 3DS, let’s hope I can avoid temptation!

Because of my own experience last week, this month I’m sharing some wisdom from other writers and bloggers about how they cope with writing while sick.  And also sharing some adorable Toothless art to cheer everybody up. 🙂

First up is Toothless by Chinese deviantartist Lily Zhou, posting as BingTatsu (formerly HappyPetArt).  Here poor Toothless has already lost part of his tail!  You can watch Lily speedpaint this on YouTube, follow her on Twitter, and check out her crazy adorable gallery for more. The first post I found about writing while you’re sick was from Lucy Flint and the Lionhearted Writing Life.  I adore her About page, and even though her last post is from August 2017, I’ll still be exploring the rest of her site because I’m sure she has more pearls of wisdom to share!

Anyway, when Lucy was ill back in July 2015, she asked herself “How can I step back from this hardworking pace, and yet still feed my work? How can I take a break — and, you know, get HEALTHY — but then re-enter my writing work in a good way?”  Her article Six Ways to Keep Working When You’re Sick holds some great advice:

I definitely followed numbers four, five, and six last week while I was down and out, but next time I’ll try out one, two, and three as well!  Read her full post to get more details.

Then check out this adorable Toothless by Mexican deviantartist Yamila Kareh, posting as hikariviny.  Check out her awesome gallery for more, with even more Toothless, and support her art on Ko-Fi.  I have to agree with one of the commentors, this might be too much cuteness! 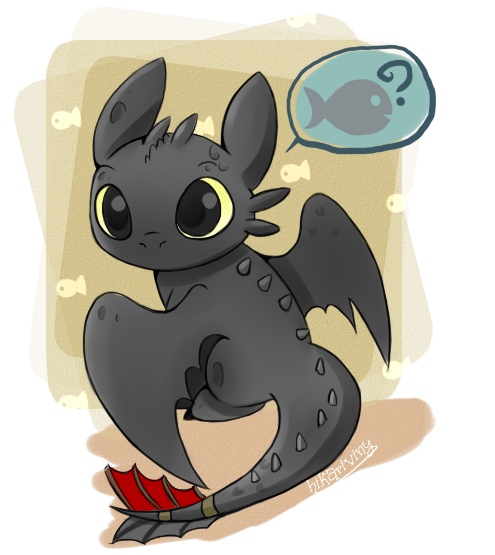 Up next, let’s see what author and blogger Jamie Todd Rubin said in his post Writing While Sick.  In August 2013 he’d had a writing streak going for more than 150 days straight, and he wasn’t going to let a summer cold slow him down.  His three tips include:

Make sure you check out his full article to get all the details — these are great ideas for getting your own writing streak going even if you’re feeling great!  Also check out his short fiction and articles and guest posts about writing science fiction, productivity, going paperless with Evernote, and more.  Learn more at his About page and follow him on Twitter.

Then here’s more fluff with Toothless by American deviantartist Ashley, posting as cuppykake and then as mellowhead.  Look at that tongue!  Whether you check out her early gallery (where this is from) or her later gallery, you’re bound for cuteness.

Then finally, author Jeff Elkins offers his own Three Tricks for Writing Even When You’re Sick. He notes that “As writers, we create new realities, which demands we use our experiences to inform our work. [But] we don’t just have to grab the good times. … When we are sick, we should try and take a step back and learn about how our characters will feel when they are struck with a disease.” His tips are:

At the end of his post he challenges you to “Take fifteen minutes and write about someone who is sick. Lean on your past experiences to bring realism to the story.” I found this intriguing, and even though I don’t think I imagined anyone falling ill in my novel (or any of my stories), this could be a really interesting exercise!

Then to wrap it all up, here’s Little Toothless by German deviantartist Isi-Daddy.  She writes “That’s Toothless when he was younger that’s why he has both parts of his tail.  And he loves fish.”  Look at those big baby eyes!  Be sure to check out her gallery where she’s also got adorable Pokemon, and follow her on  Twitter, Instagram and Facebook for more. 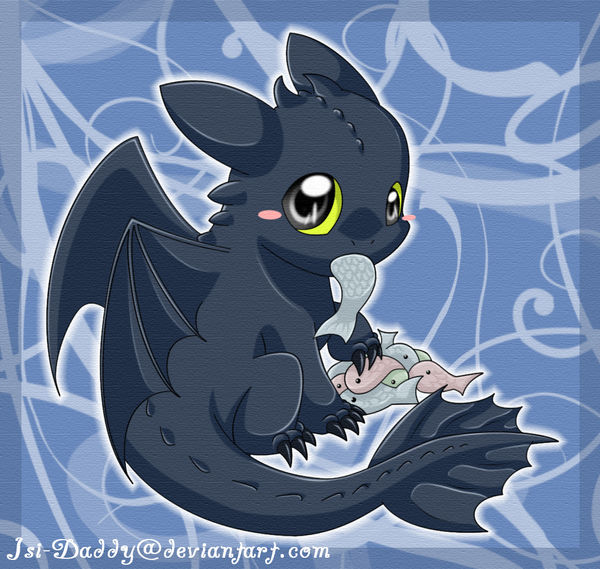 Well, this was going to be a short “OMG I’m late!” post but I worked on it all week and I like how this turned out instead!  I hope you find some good advice in those articles, I hope the Toothless pictures made you feel better (they certainly did me!), and I’d love to hear in the comments how you cope with writing while sick.  🙂

I’m going to be posting the fifth part of the Renaissance Festival series next, and then next week is December birthstones already?!  Omg.  As always I’ll persevere folks, so thank you as always for reading, take care, and stay creative!