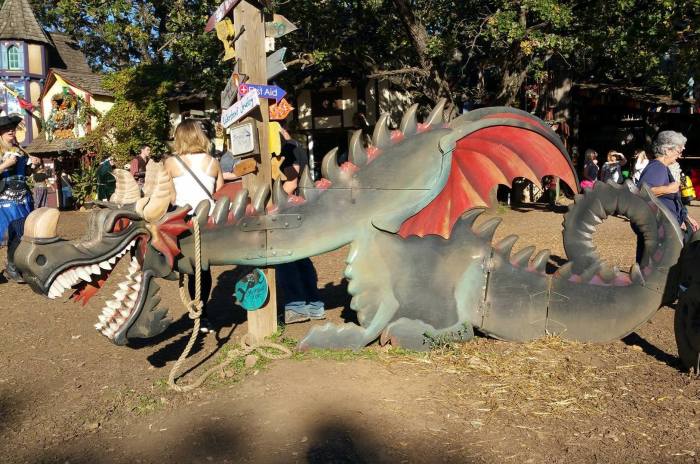 On Sunday, I spent the entire day at the Minnesota Renaissance Festival, all by myself this time so I could wander where I liked, listen to lots of different musical performers, and supposedly get some writing accomplished.  This is a cool wooden dragon carving attached to a signpost that I thought would make the perfect featured image.

When I arrived in the morning I got my hair braided — not quite as usual, since for the last several years I’ve attended, I’ve had hair down to my waist so they’ve been able to do multiple intricately coiled braids, and this year I walked up with hair that doesn’t even brush my shoulders! — but the talented hair artist was able to give me a couple of cute mini braids with some “fireworks.”  It was cheaper than I’ve had to pay in the past, of course, so with my savings, I also bought a cool walking staff! 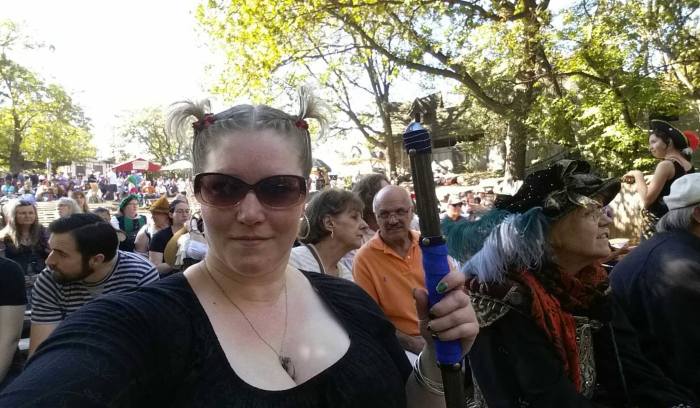 While I waited for my turn, I found a nice spot at the Queen’s Pub and listened to a group called Kindred while I finished writing and posting Friday’s Random Writing.  I also caught the beginning of a group called BattleLegs.  Yes, it is a bit strange to go to a Renaissance Festival and sit at a traditional-style pub with rough hewn timbers and even rougher tables and benches, and pull out a tablet and keyboard and start typing away, but I don’t mind the funny looks.  (I get that when I write at a modern bar as well, so I’m used to it!)

Posting accomplished, hair braided, I went to see the a performance by the Belarusian medieval folk band called Stary Olsa, currently on their North American tour, and that was quite a treat!  Their website explains them best: 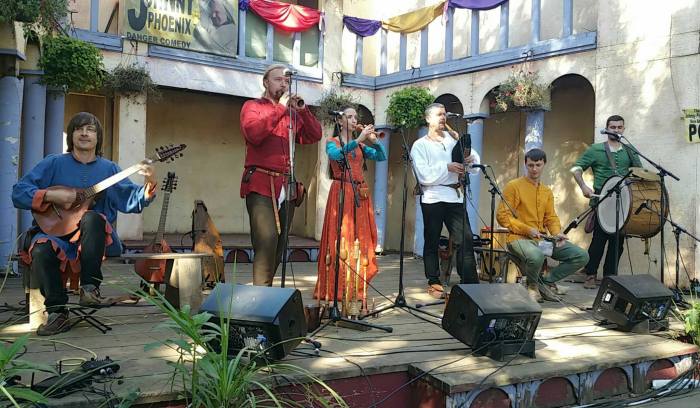 However, that’s not all — this group is also popular for their arrangements of modern tunes for their medieval instruments, and at the performance I attended, they played Pink Floyd’s Another Brick in the Wall to the delight of the audience.  Stary Olsa has a Kickstarter for their newest Medieval Classic Rock album which has already reached it’s goal and includes songs like One by Metallica and Smells Like Teen Spirit by Nirvana, and now their stretch goals include the possiblilty of adding two additional covers.  Check them out if you have a chance!

After that great performance, I wandered around the festival and had some lunch before finding Mac’s Pub to settle into for the afternoon, to listen to more music, get more postings finished, and after that possibly do some actual writing.  But alas, the wireless signal was terrible on that side of the festival grounds!  However, I really enjoyed all the acts I saw, including the Leprechaun Pirates, the Wandering Folk, Gabriel Heller, The Langer’s Ball, and Bardz at Large, and I didn’t want to leave before the main attraction at Mac’s Pub, seeing The Dregs once again. 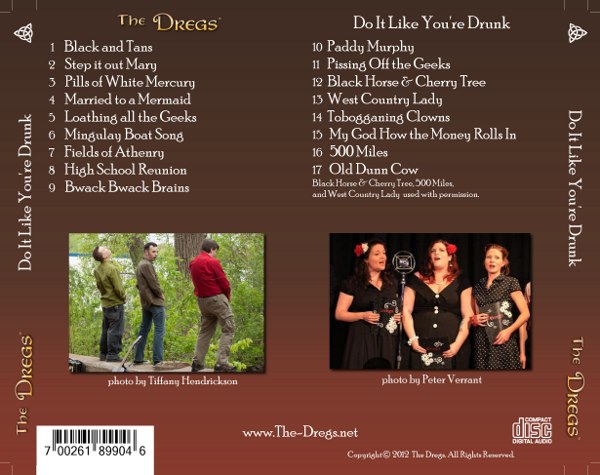 I even picked up the Dregs’ 2012 CD called Do It Like You’re Drunk.  It includes some traditional songs as you can see, but they also have tons of comedy songs like Bwack Bwack Brains (yes, about zombie chickens) and Pissing Off the Geeks, which includes lines like “Firefly is overrated,” “Action figures with dry brushing / are useless in my world” (a reference to my husband’s hobby of painting and gaming with Warhammer miniatures), and “I stopped reading at Dragon Song,” which nearly made me spit out my mead!

After that, I caught a performance by The Danger Committee, an awesome stunt show that’s been featured on America’s Got Talent (and you can watch an entire peformance of their Ninja Show on Youtube), and then I tried to find another place to settle down to write back at the Queen’s Pub where I’d gotten good reception in the morning, but the festival was so busy by then I couldn’t find a spot.

However, I did get to check out the nice folks from the Minnesota Herpetological Society, and a volunteer named Linnea told me all about the Ball Python (Python regius) she was showing off. 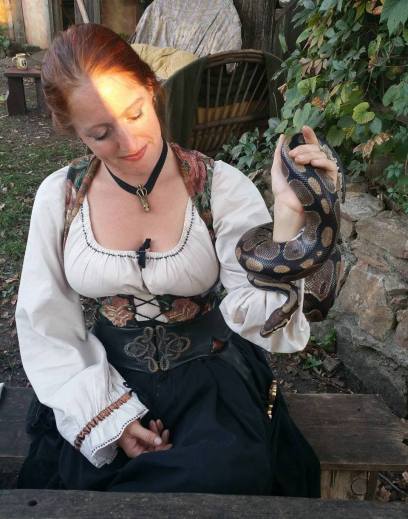 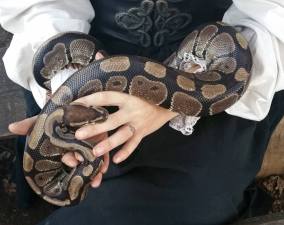 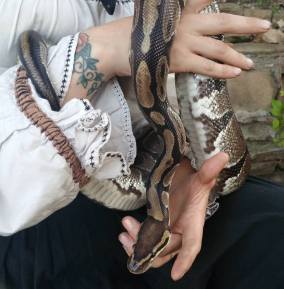 These snakes are native to Africa, their average lifespan is 30-40 years and this one is fully grown, and they curl up into a tight ball when threatened, hence the name.  Linnea also told me these pythons are not the kind I’d heard about when I was in Florida, but that a hurricane damaged a large snake hatchery there, contributing to their snake overpopulation woes.

Well, that’s it for my day at the Renaisannce Festival, and I can’t wait to head back there again next year.  For now, thanks for reading, take care, and stay creative, everyone!

Image credits:
Festival images taken by me at the Minnesota Renaissance Festival on September 2, 2016
The Dregs’ CD Do it Like You’re Drunk album art from their Facebook page