I had Serenity on my mind today, so I found the perfect dragon to feature!  This is Serenity by Latvian deviantartist Kerneinheit.  I love the slightly translucent nature of the wings and body, and the glowing gem in the center reflecting on the grass, and the star backdrop is also lovely!

This artist, who also has a Tumblr called HornedFreak, has done some seriously beautiful artwork that you can see both there and at her deviantart gallery, and of course, she’s done more dragons, two more of which I’ll share after I explain the Serenity connection.

Last night, my husband and I got to attend the Can’t Stop the Serenity global charity event here in Minneapolis, a yearly shindig that gives us the chance to watch Joss Whedon’s awesome movie Serenity (the continuation of the Firefly ‘Verse) on the big screen again, surrounded by fellow Browncoats and fans.  And as a bonus, we always start off the festivities watching Whedon’s Dr. Horrible’s Sing-Along Blog, which gets the whole theater singing along. 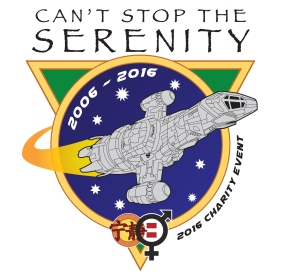 The CSTS website explains what it’s all about more succinctly that I could:

Since 2006, fans have organized screenings of Joss Whedon’s Serenity to raise funds and awareness to support Equality Now in their work for the protection and promotion of the human rights of women around the world. Join us as we aim to misbehave for a good cause!

There are two ways to fight a battle like ours. One is to whisper in the ear of the masses, try subtlely and gradually to change the gender expectations and mythic structures of our culture. That’s me. The other is to step up and confront the thousands of atrocities that are taking place around the world on an immediate, one-by-one basis. That’s a great deal harder, and that’s Equality Now. It’s not about politics; it’s about basic human decency.

Since 2006, the CSTS events have raised almost $1.1 million for Equality Now and other charities, and I’m glad to be a part of it every year I’m able to attend.  About thirty cities are participating this year, according to the CSTS location finder, and while some event dates (like Minneapolis) have already passed, there are still plenty of cities where you can get in on the fun in the next few months!  Check out the CSTS website or these direct links for more details!

We had such a great time, so if you have the chance to go, I’d highly recommend it!

All right, back to the beautiful dragon art of Kerneinheit, who used to go by the handle The Nightmare Dragon, I’m inferring from the way her digital files are named.  This one is called Brighter Than The Moon, and is her rendition of a dragon from the Dragon Age fantasy world:

And finally, here is a painting she calls Old Friend, with an Arkanian dragon and a Sith from the Star Wars universe.  I had no idea there were dragons in the expanded universe of Star Wars… I might have to delve a little deeper into that huge fandom if that’s really the case!

All right.  I’m completely out of time again, so I’m going to wrap this up and try to get some actual fiction writing done again tonight, since I had a flash of inspiration while watching Serenity that I hope might un-stick the current Neeka chapter.  Wish me luck!

Take care everyone, thanks for reading, and stay creative!!

One thought on “Serenity by Kerneinheit (and the Can’t Stop the Serenity charity screenings!)”