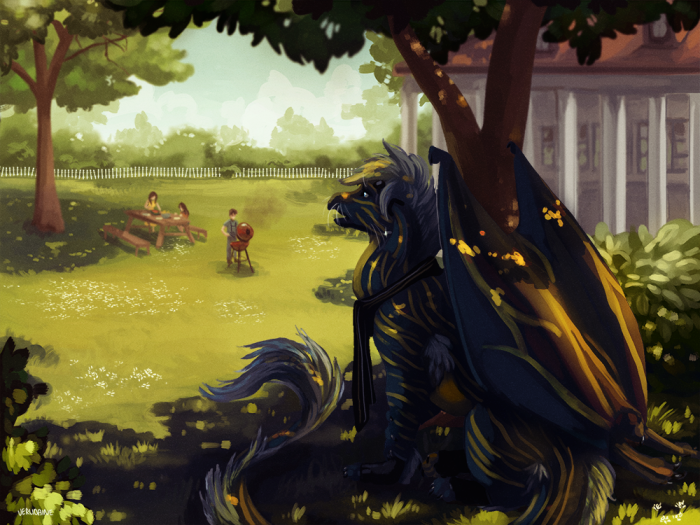 The dragon is in shadow and a little hard to see in tonight’s artwork, but that’s on purpose, actually — this painting is called Uncertainty by American deviantartist Verlidaine, and was done as a speedpainting commission for one of her fans.  There’s a story to go along with the painting, written by the fan as an inspiration for this piece, and as soon as I read it, I knew I had to share:

Adjusting to life on the farm is still new for the dragon. Being around humans who dont fear him is a foreign concept to him. For so many years of living under the witch who had him slaughter so many, but here they do not fear him nor do they want to attack him they want to befriend him…. be his new family. Just like the small village that saved his life, they show kindness, compassion, patience. Maybe humans are not so evil, the dragon sat and pondered a distance away. His mind was tormented still every day with all those that he killed with anger from his childhood and to please his mother.

He thought of his past actions in his life. Maybe the humans were right to cage me, maybe I am a monster that doesn’t belong among the human world. I killed countless in rage and anger, thought the dragon as he stays hidden.

This so reminds me of our newly rescued momma cat River Song!  She’s been getting better and better as the days go by, and now we’re at the point where we can feed her treats from our hands, and sit on the bed with her, and even pet her without her running away in fear, but this poor kitten has had a rough life.  It’s going to take some time for her to realize she’s finally in her safe, loving, indoor-always forever home, and that she’s going to get to live with her two kittens (who are adjusting much better, of course) forever.  I just know that we’ll break through River’s tough, skittish shell before too long.

Verlidaine does a lot of great speedpainting and she has a couple more dragon pictures in her gallery that I just loved as well.  Here’s one of my favorite Toothless called Glow Thing?!?!:

And then here’s a really elegant dragon in a painting called Marble House.  I think this would make a great desktop wallpaper with the soothing whites, greys, golds and blues: