Happy New Year Everyone!!  And what a year it’s been!  Let’s celebrate with a Dragon Drink… or two… or how about eighteen?!  Yes, really!!  Kicking off this supersized post, this is Midori Sour by one of my all-time favorites, Israeli professional artist Taly Reznik, and I’m excited to share the rest of her fabulous “Drinks Dragons” series by this artist who posts as Trollgirl on DA.

And as long as you’re of legal drinking age wherever you are, if you like any of the drinks you see, feel free to try them out — I’ll also be including links from Liquor.com to the recipes, like this one for the Midori Sour!

These #InkandDrink dragons were part of Taly’s Inktober 2018 project.  She posted these and other images to her Facebook during the month of October, and when I saw them I knew I had to feature her as my New Year’s post! Taly was even nice enough to answer some follow-up questions I had about the dragons, so read on for more!

Of course, to me it’s not New Years without it, so up next is the Pink Champagne dragon.  Posted as her seventh Inktober artwork, Taly wrote, “The theme of the month is clearly angling towards dragons and alcoholism. Here’s Pink Champagne. She’s fancy.”  You can even mix this with vodka to make a champagne cocktail if you don’t want plain bubbly!

Then as a late entry to Inktober, here is Red Wine Dragoness, “an elegant lady with just a hint of a bite.”  Taly said this was “an extra that a client ordered,” along with another you’ll see later in the series.  While it’s usual to drink red wine plain, you can find some cocktail recipes to mix things up.

But not everyone likes fancy drinks — I love this next one because he reminds me of my dad.  This is Beer Dragon!  “He’s celebrating Oktoberfest,” Taly says.  I myself am definitely not a beer fan, not even if you mix them into beer cocktails, but to each their own, of course.  (Also, I had to put these next to each other, because I love the musical RENT, and keep singing “Wine and Beer!”) (*1) 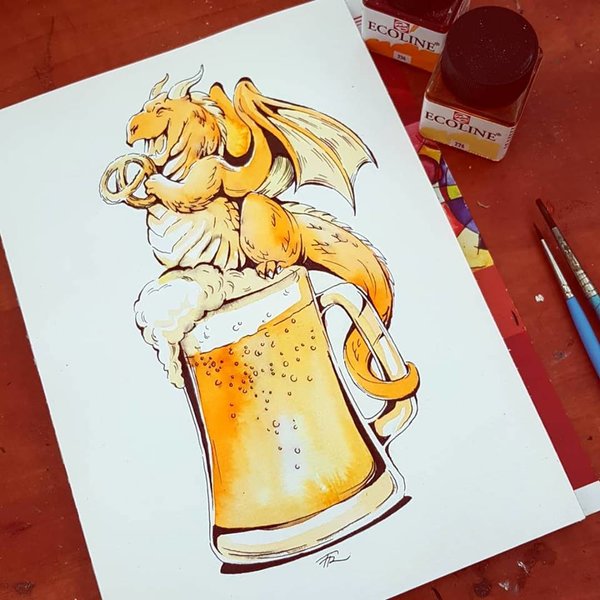 But now it’s time to get to the liquor!  This is Banana Daiquiri, or as Taly wrote it, “Bananana Daiquiri dragon, a tribute to my favorite author.”  When asked in the comments about the creative spelling, the Israeli artist quoted, “Nanny Ogg knew how to start spelling ‘banana’, but didn’t know how to finish!” (*2)  Find the recipe for a Banana Daiquiri Done Right here.

This next one is called Creature from the Blue Lagoon, another beautiful dragon!  The recipe calls for Vokda, Blue Curacao, and lemonade, and it looks so yummy I might have to get one tonight!

Then we have “the very exotic Mai Tai dragoness,” a drink with lots of fruit!  Here’s the recipe for the Tropical Mai Tai… which might just have been a bit of inspiration for Taly, it seems!  😉  All of these drinks make me want to find a beach somewhere… *sigh*

Then just look at this cutie!  Here’s a happy Pina Colada dragon, and Taly writes, “If you like Pina Coladas, and licking a dragon’s tail…” conjuring up the song by Rupert Holmes.  The rum, coconut milk, and pineapple juice recipe is here!

Then here’s the Margarita dragon, “a fun lady with an edge, sister of Tequila Sunrise” (who you’ll see below!).  There are many varieties of margaritas, but according to Liquor.com, this is the only Margarita recipe you need.  I’m not a fan, but I do like margarita-flavored wine coolers sometimes!

And here is sibling Tequila Sunrise, “quite the party animal!”  I think Taly really nailed the bright colors to “evoke a summer sunrise.”  I have never been a tequila fan myself, but you can find the recipe here to decide for yourself!  I mean, he looks super happy, so maybe it’s worth another try? 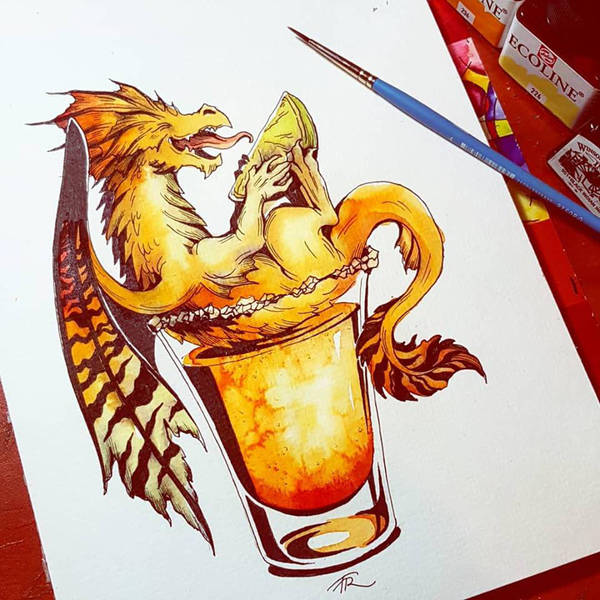 But if you’re not in the mood for a “frou-frou” drink like any of those above, what about this classic Old Fashioned cocktail dragon?  Taly writes, “He sleeps a lot, but that doesn’t mean you can steal his olive!”  This drink can be made with different spirits, but the original recipe uses American whiskey. 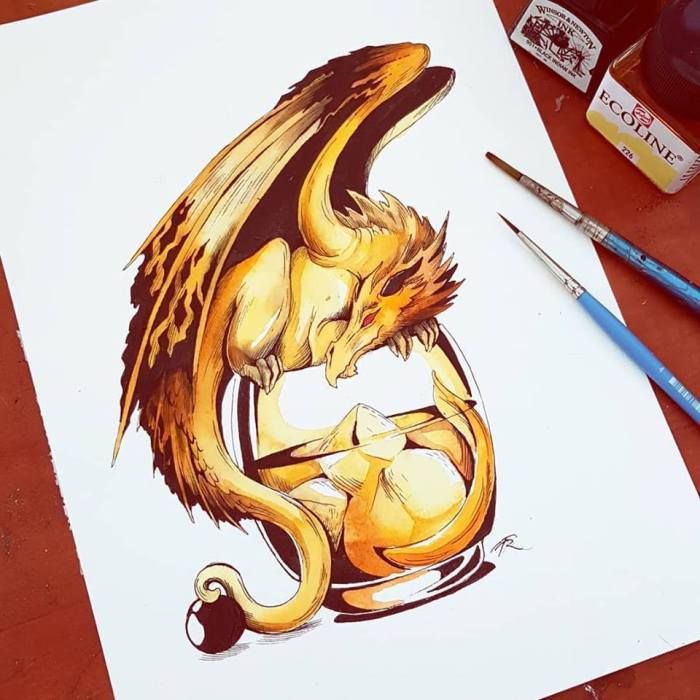 And speaking of spirits, next are a couple of drinks you don’t need to mix with anything.  This first is Cognac, a “sleek bastard,” according to Taly.  I love how a lot of these dragons’ wings almost follow the contours of the glasses they’re perched on!  You can also put cognac in drinks, though — find some here.

Then here’s a super fun one, the Absinthe dragon — Taly says “He ate the green fairy.”  Yikes!  You can watch a cool one minute video about this spirit at Liquor.com, and find some recipes for Absinthe cocktails if you’re not up to drinking it in the traditional way, straight up mixed with water poured over the sugar cube he’s holding.

And then we come to another of my favorite drinks — this is the Sake dragon, who “makes up for a lack of wings with his impressive whiskers.”  I know the trendy thing right now is cold sake, but I’ve always loved hot sake with my sushi or hibachi dinner — and this article called Everything you need to know about warm sake, including why it’s pretty darn good by Liquor.com contributor Kat Odell backs me up!

And next is another classic — here is Whiskey dragon, “A terrible snob,” Taly writes.  I love the square glass here, and I’d say he looks satisfied with his choice of fancy whiskey, that’s for sure.  To go with the classic drink, I love this very classic dragon design — and notice he’s holding a tiny cigar, as well!  Learn more about whiskey and find some cocktails here.

But I know there are folks out there who don’t drink, and I wouldn’t want to leave anybody out — and neither did Taly!  So another late Inktober entry was this adorable Strawberry Fanta dragon, “for a young lady that loves” this soda.  I have to say, I’ve never tried it, but it sounds sweet, and this dragon is beautiful too!

Interestingly, Fanta is a Coca-Cola product, and Taly also drew this non-alcoholic Coca-Cola dragon that she called a misfit, but I think serves as a great reminder to take a designated driver along on any New Year’s Eve adventures you might head out to this year.  Please drink responsibly and be safe! 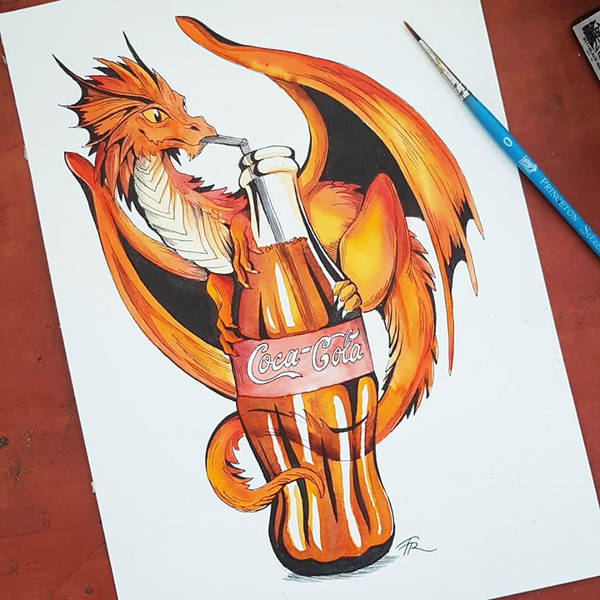 And then, finally, after all of those drinks, we come to another of my favorites — this is the Cosmopolitan dragon, “a spiny bitch,” as Taly puts it, but I just think she looks sophisticated.  😉  Check out The One Cosmopolitan Recipe to Rule Them All and make yourself one of these drinks that were popularized by HBO’s Sex and the City.

I’m not a martini drinker myself, but I do drink vodka, so I thought that would be a good place to end this crazy night.  Please make sure you’re not trying all of these in one sitting, that would be dangerous!  But I hope Taly’s artwork inspired you to try something new this New Year’s Eve.  Make sure you follow her on Facebook and Instagram, and check out her deviantart gallery for more great artwork.

Taly told me she doesn’t really sell her artwork overseas because she hasn’t found a way for international post not to mangle her prints yet, but there was some discussion on her Facebook page about buying these as postcards, which I will definitely keep on my radar.  I’d love the full set!

Okay, that’s a really long post for my last one of the year!  I hope you come back to see what I’ve got planned for 2019, including finishing the Renaissance Festival series, continuing the Birthstone series, and hopefully getting more of my fiction written!

For now though, I’m taking just a little time off, so come back for my first new year’s post by the end of next week, January 12, 2019.

Thank you as always for reading, take care, and stay creative in the New Year!

(*2) She’s referencing is the comic fantasy author Terry Pratchett, of Discworld fame, who also once wrote in his author blurb for Good Omens that “He likes people to buy him banana daiquiris (he knows people don’t read author biographies, but feels it might be worth a try).”

3 thoughts on “Happy New Year! with Drinks Dragons by Taly Reznik and Drink Recipes to Celebrate!”