My dear readers, I hate to make excuses for why I’m late with a post, but this time I’ve got a great reason!  You know how I have trouble keeping “short posts” short…?

Well, last time I mentioned that I’d be featuring “a few” more Renaissance Festival (“Fest”) artists this week, and hoped to have enough for one more post after that.  Umm… it turns out, on the last weekend I was a bit overzealous in the shops looking for dragon art and talking to brilliant artists…

… and when I got home I realized I had more than 100 new photos from over a dozen different shops that I’d offered to feature — way too many for only two more posts! 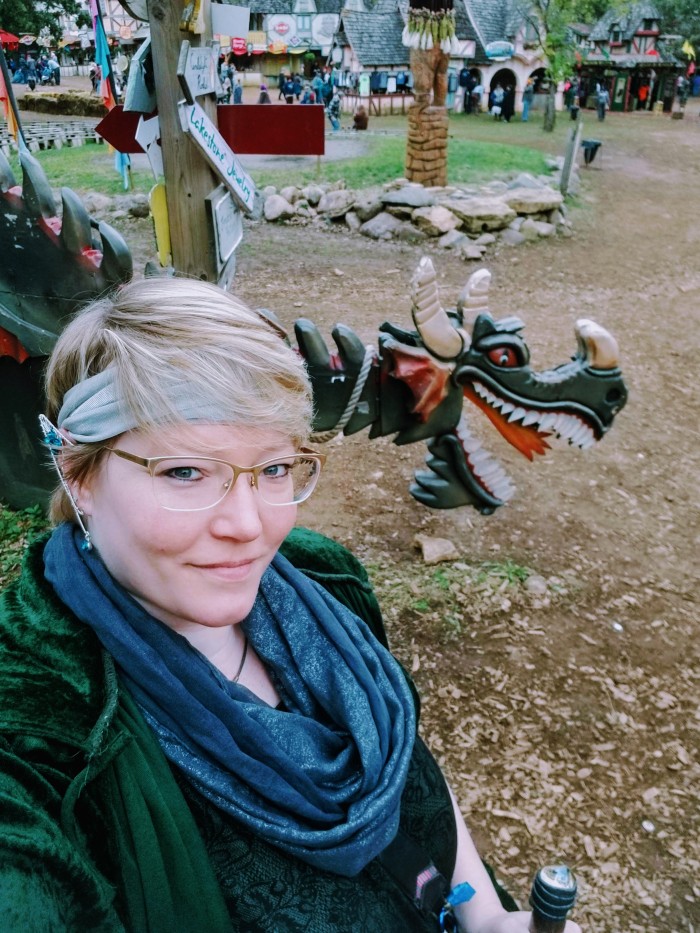 That’s me on Saturday, and you might recognize the dragon behind me from another post I did about Fest a few years ago.  I loved this selfie so much, I made it my new author photo on my slightly updated About Me page — and if this isn’t the author photo in my novel Finding Dragons eventually, I’ll be very disappointed.  😉  (I love my silver elf ears!)

Okay, back to it — I knew this would require detailed planning to pull off, and I spent last week examining my photos, my calendar, and my options.  I’m still committed to one post a week, and I want to do right by these amazing artists who’ve entrusted me with their artwork, but I also don’t want this site to turn into “all Fest, all the time!”

So after some juggling, I came up with a new schedule — seven more Fest posts over the next few months, featuring at least two artists each, taking the place of my short posts, in between the monthly birthstones, monthly Writing Thoughts, and upcoming holiday posts.  This is the second of eight, and I’ll be posting the last in the Fest series at the end of January.

So that’s the plan!  Now let’s finally see some of these dragons, shall we?  Up first are the “colorful creations through the magic of polymer clays” created by Jerry and Colleen Larson, the husband and wife team from Wisconsin behind Whimsey Winks, seen here in the workshop of their Fest shop near the dragon signpost above.

Below are a couple of dragons just doing their thing — the blue one looks lost in thought, and the black one is standing guard on his crystal ball!  You’ll also see another reason I fell in love with the shop — not only do they make dragons, but they make CATS as well!

A dragon holding a sword seems just perfect for a Renaissance Festival, don’t you think?  Jerry and Colleen have been making “polymer clay sculpture with a fantasy theme” and selling their wares at the “Renaissance Festivals, street fairs, and Cons” for almost three decades.

Now look at these adorable kittens.  I love how the clay can be mixed to show that striping pattern!  And the expression on the silver cat is really great as well — the black band across his head reminds me of a head scarf, and makes him look like a little pirate cat!

The Larsons create many different varieties of dragons, cats, and baby dragons in a rainbow of colors and holding lots of different items — check it out, the pink one on the right is holding a little bunny!  You can even purchase one of the little baskets with straw to put your new purchase in for safe keeping and display.

I can’t even tell you how tempted I was to buy this book-reading dragon.  Have I ever mentioned how weirdly hard it is to find a picture of a dragon reading a book?  Well trust me, it’s hard!  (So I might have kept one photo in reserve for a future Writing Thoughts post… wait and see!) 😉

This beautifully colored dragon with her necklace and black crystal ball was one of my very favorites in this shop full of wonders.  Of course, the little one looking so creepy and happy holding that little skull is kind of distracting, though! 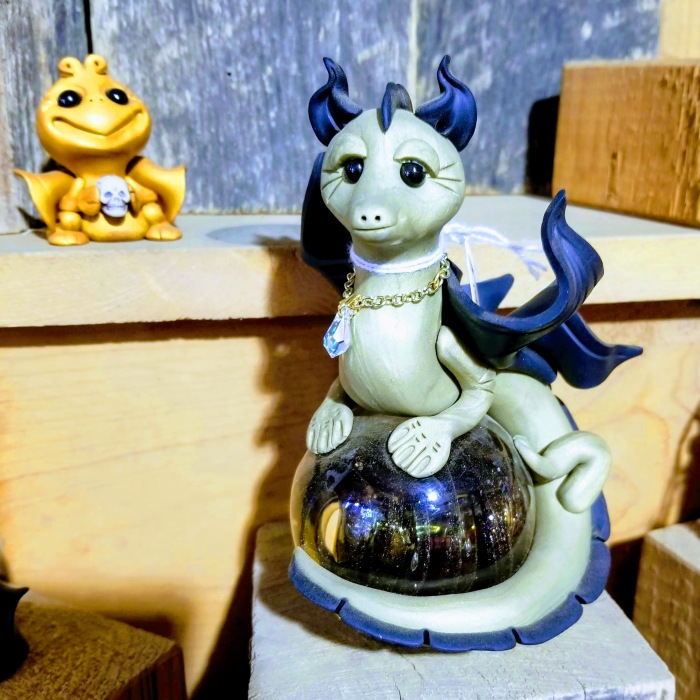 I was really happy to discover Jerry and Colleen’s shop this year, even though they’ve been at Fest for many years and somehow I just missed them!  I definitely plan to order something from them in the near future.  You can get your very own as well, just follow them on Facebook at Whimsey Winks and send them a message!  You can even check out some of their upcoming Halloween and Christmas dragons now that Fest is over (although these might also show up in my upcoming holiday posts too, of course.)  😉

Next, check out the amazing Copper Sculpture of John H. Lange and Patrick C. Lange.  Pictured here at their shop, this is John and his nephew Zeke, also part of the family business.  John writes that Zeke has “incorporated his own creative pieces based on his affinity for the outdoors to the booth’s collection.”  In this picture you can also see Oak Branches, Willow Branches, and a Bare Tree, as well as The Sun, a Prince symbol, an adorable abstract image, and a fountain I’ll show you close up in a moment, all made from copper (and sometimes a bit of brass).

Okay, so while I didn’t find any actual dragons in the awesome artwork of Copper Sculpture, I did find dragonflies, which are good enough for me. 😉  This has always been one of my favorite shops at Fest, and it’s one of the handful I’ll be featuring in this series that doesn’t have any dragons, but is still very cool.

John writes that his love of copper artwork “all started by making tea light lanterns,” and that he is “inspired by the wildlife of the Mississippi River.”  Beneath the White Pines and Oak Branches below you can see his Dancing Heron Fountain, which stands over five feet (1.5 meters) tall and shoots water up from jets in the base.

This picture shows a few different pieces like the Cattail Fountain in front next to a wall-mounted bird bath, the birds on the wall and the trees in the back with the patina green finish, birdhouses (with removable bottoms for easy cleaning), a full sized Garden Arch, and another fountain you’ll see again in a moment.

I really loved this Owl and these oak leaves representing the different seasons — they come in green, golden, fire-red, and burnt brown.  They’re so lifelike even though they’re made of metal!  You can buy them as single pieces like this, or in a framed display series you’ll see later.

This is the Two Heron Fountain that stands three and a half feet (1 meter) tall that also shoots water from the center of the base, which then “splashes down onto three lily pads … making a sound like rain on a roof.”

Then there’s this beautiful piece at the front of the shop called Three Sided Guardian, an eight foot (2.4 meters) tall balanced wind sculpture, with a Dripping Vine Fountain against the wall and the Four Seasons and Four Seasons Branch leaves series in the center of the photo.  John has had a booth of some kind at the Minnesota Renaissance Festival ever since it opened in 1971!

And finally, the piece I would love to own someday, this is the Dripping Cups Fountain that stands about five feet (1.5 meters) tall.  It is a “free-standing fountain,” and comes with or without a circular nine inch (22 cm) deep base that holds 30 gallons (113 liters) of water, which is “pumped up to the top and then runs out and through the leaves, throughout the entire fountain.”  So pretty! 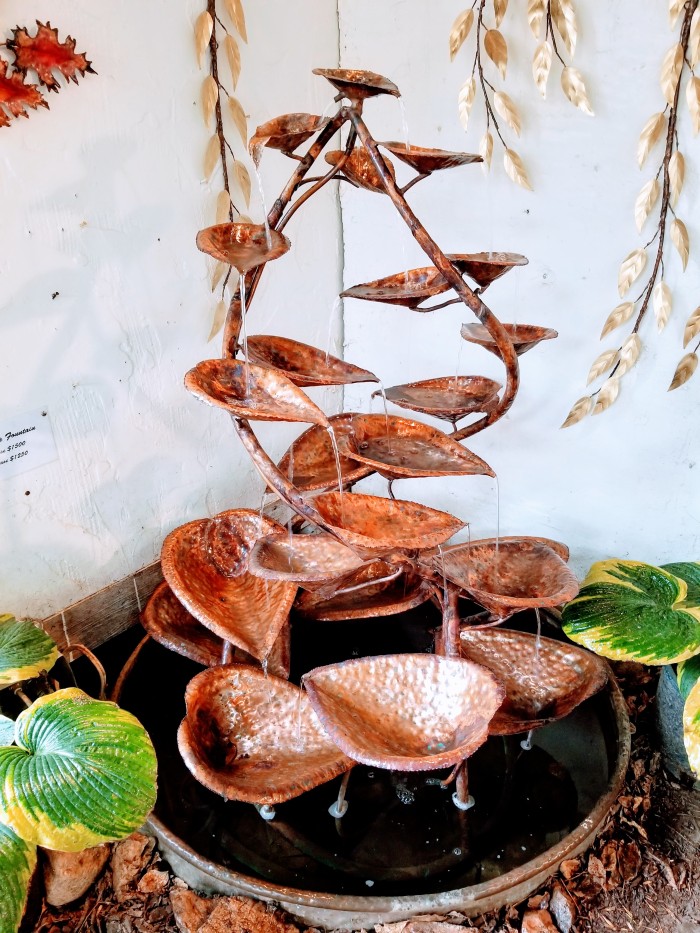 John writes, “Every sculpture you see here is from my family’s hands to yours. I truly hope you enjoy your sculpture as much as I have cherished the journey of creating it.”   You can find more of their artwork (including amazing “before and after” photos of copper pipes turned into trees!) and get in touch about ordering your own at Copper Sculpture by John H. Lange and Patrick C. Lange.

Then, finally, here is one last photo of me from the end of the first day of the last weekend of Fest.  I might’ve had a few glasses of mead by then, but of course I wasn’t driving, so it’s okay!  And it’s my pleasure to introduce you to the Minnesota Renaissance Festival’s vaunted King Henry, otherwise known as John Behr (and a few of his guards photobombing us in the background). 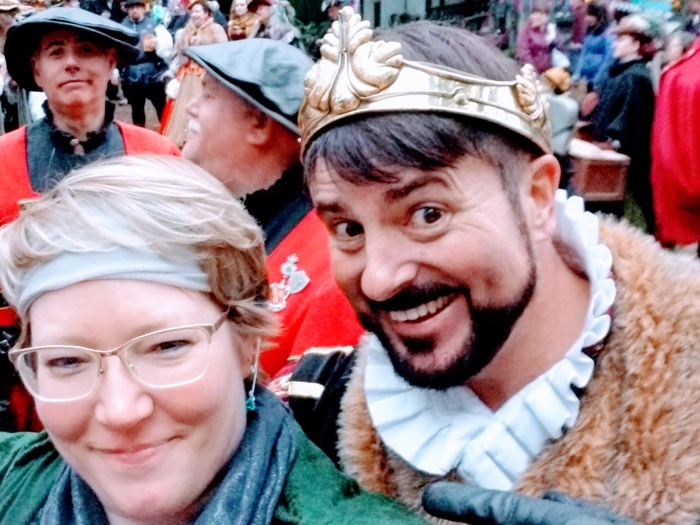 This year marked His Majesty King Henry’s twelfth season as our liege lord at the Festival, and you can learn more about him in this feature written on the Minnesota Renaissance Festival Blog last year (he began his career at Fest 30+ years ago as a street hawker!).  After the photo I was able to slip him my card as I explained that I would be “writing about his subjects” in the coming weeks, so now that Fest is over and he should have access to modern technology again, I wonder if he’ll stop by?  😉

Whew, I did it!  Second Fest post down, six more to go, and I’ve added another new menu bar selection if you want to see all of these together.

Next on the agenda are the October Birthstones dragons, which also looks to be a super sized post…  it’ll take a miracle, but I do still intend to have that out by the end of the week to stay on track, so stay tuned for that!

Meanwhile, that’s it for me right now — thank you as always for reading, take care, and stay creative!

Image credits:
All the photos in this post were taken by me at the Minnesota Renaissance Festival in Shakopee, Minnesota (just south of Minneapolis) on Saturday, September 29, 2018, and used with the kind permission of each of the creators for this post.

Scribbler of Fantasy Tales and stories of a darker nature