U is for Ultima

Apologies for the delay, but up next in my 2017 AtoZ Challenge, let’s take a look at the dragons in another video game franchise I sadly never had the opportunity to play — the classic series called Ultima, and it’s MMORPG successor, Ultima Online. 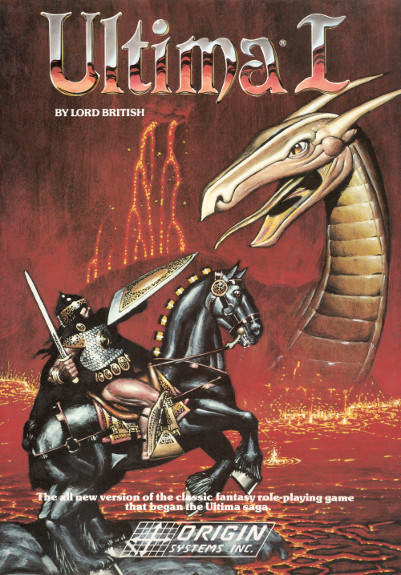 Above is the original box art from Ultima I created by Denis Loubat and found at the Codex of Ultima Wisdom wiki (I’ll call it the Ultima Codex going forward).  You’ll see another of Loubat’s pieces and learn more about him below.

According to the (possibly a little biased) Ultima Codex:

Ultima is a computer role-playing game series developed by Richard Garriott and first released in 1980. …

The games comprising the Ultima series were … the defining computer role-playing games [of their day, from 1981-1999]. Both the Western and Eastern RPG “schools” [of RPG design] … were heavily inspired by the Ultima games, and still feature numerous gameplay and interface conventions that one Ultima or another introduced. …

Ultima I: The First Age of Darkness told the story of the Stranger from Another World [Earth], who was summoned to the land of Sosaria by Lord British to confront and defeat the evil and immortal wizard Mondain.

Over the nine volumes of the original Ultima series, you control the Stranger, later called the Avatar, through many adventures to protect and defend the realms of Sosaria/Britannia, in an open-world fantasy setting.  The story unfolds over three time periods (with three games each) — the Age of Darkness, the Age of Enlightenment, and the Age of Armageddon.

According to Wikipedia, one of the reasons Ultima is considered one of the RPG genre’s defining games is due in part because:

[Ultima III] was … revolutionary in its use of a written narrative to convey a larger story than the typically minimal plots that were common at the time. Most video games – including [series creator] Garriott’s own Ultima I and II … – tended to focus primarily on things like combat without venturing much further.

Here is a lovely fanart from the Ultima series called Avatar Meets Dragon by American deviantartist Shane, posting as Locrum.  He captions it, “Realizing he’s stumbled into a dragon’s lair rather than the mine he was looking for, the Avatar hastily makes his way back towards the exit…”  Yeah, I think I would as well!  Check out Shane’s gallery for more.

I do wish I’d had a chance to play this game back in the day, but perhaps I can revisit it in the MMORPG version!  According to Wikipedia:

Ultima Online is a fantasy role-playing game set in the Ultima universe. It is known for its extensive player versus player combat system. Since its release [in 1997], it has added eight expansion packs, a booster pack and dozens of free content updates.

The release of Ultima Online: Kingdom Reborn in 2007 brought a new game engine with upgraded visuals.

Here is the current Ultima Online banner from the Ultima Codex:

Even though the Ultima Codex called the MMORPG “a spin-off — and … meant, in some ways, to be a culmination” of the original Ultima game series, I was intrigued to discover that an alternate version of the events at the end of Ultima I created the Ultima Online world.

As explained by another Ultima wiki, the Stranger defeated the wizard at the end of the first game by shattering the dangerous Gem of Immortality.  That Gem held an image of the world of Sosaria within it, and when it shattered…

… each shard [of the Gem held its] own identical image of Sosaria. The shards … therefore represent a sort of quantum multiverse consisting of many copies of Sosaria, each with their own past, present, and future.

The term shard, in Ultima Online (and by extension, many of the other MMORPGs that followed), is used for an instance of a gameworld in a server.

As a great lover of multiverse theory, I think that is an amazing way to explain how new online player characters can join the Ultima world, and yet not affect the canonical Ultima single-player world, nor other instances of the game played on other servers!

Above is an official sculpture from the Ultima Online series of figures by McFarlane Toys called Ancient Wyrm, shown in a great photo from the Pintrest site of Ildikó Csepeli.  Todd McFarlane himself was brought on to the Ultima Online development team to create monsters for a ‘darker’ expansion called Lord Blackthorn’s Revenge.

Just as a side note — I was fascinated to discover that the launch of Ultima Online didn’t quite go off as smoothly as the developers would have liked.

This post is already running long (and overdue), so if you’d like to learn more about what has been called ‘one of the most memorable event in MMORPG history’ (right up there with Killing the Sleeper in Everquest), check out the description of The Assassination of Lord British, creator Richard Garriott’s ‘invincible’ NPC, during a beta demonstration of Ultima Online!

But really, back to the art.  A later expansion for Ultima Online introduced a major quest area called the Stygian Abyss Dungeon.  It was here that brave adventures, often in groups of up to ten players, could fight the mighty Stygian Dragon, a Peerless Boss, seen here in an image from the Pandora UO Wiki. (Pandora is one of the shards, or servers, of Ultima Online.)

To see the Stygian Dragon in action, check out this 20-second clip from a longer video of Youtuber TheLegendarySideffect taking on the beast in it’s lair.  Here in the middle of the battle, the dragon gets the better of the player character!  (In the game, however, dying is only a momentary setback, and TheLegendarySideffect does prevail, eventually.)

Interestingly, the throwback art of Ultima Online is part of it’s charm, according to many fans.  But back in 2004, professional pixel artist and avid UO fan Andrea Fryer (also known as Saphireena) created the pixel graphics challenge on a well-known UA forum.  She felt that the graphics of her beloved game had been steadily deteriorating over the years, thanks to turnover in the art department, and wanted to draw attention to the problem.  Her thread was active for more than two years, and eventually garnered the attention of the artists and developers of the game, who then worked with Andrea and other artists to improve the graphics!

I discovered this story because one of the monsters Andrea set out to recreate was the Skeletal Dragon.  Here is the prior in-game version on the left, and Andrea’s (demo) version on the right, and below, her Skeletal Dragon alongside other in-game dragons — it’s such an improvement!  As Andrea put it, “The [Skeletal Dragon] is meant to represent a ‘boss,’ which usually means it should be even more fearsome than the normal dragons. But on the contrary, this creature looks pathetic and helpless!”  You can read more about this and see more of Andrea’s renovated graphics at that link. 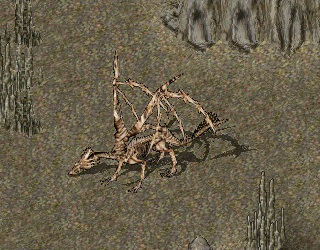 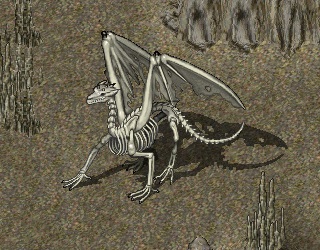 There is a robust fan community surrounding this game, started back in 1992, called Ultima Dragons, dedicated to “helping others with their Ultima questions, discussing Ultima, and, most obviously, sharing information and creative exploits.”  The group is still very active to this day!

As I mentioned above, American professional artist Denis Loubet worked on the Ultima computer games and Ultima Online.  He also created this Ultima Dragons 25th Anniversary Poster for their big celebration party at Disneyland, where he was a special guest along with creator ‘Lord British’ himself, Richard Garriott.  You can check out a detailed account of the event by fellow blogger Slashing Dragon, and check out Loubet’s deviantart gallery and his official website for more art. 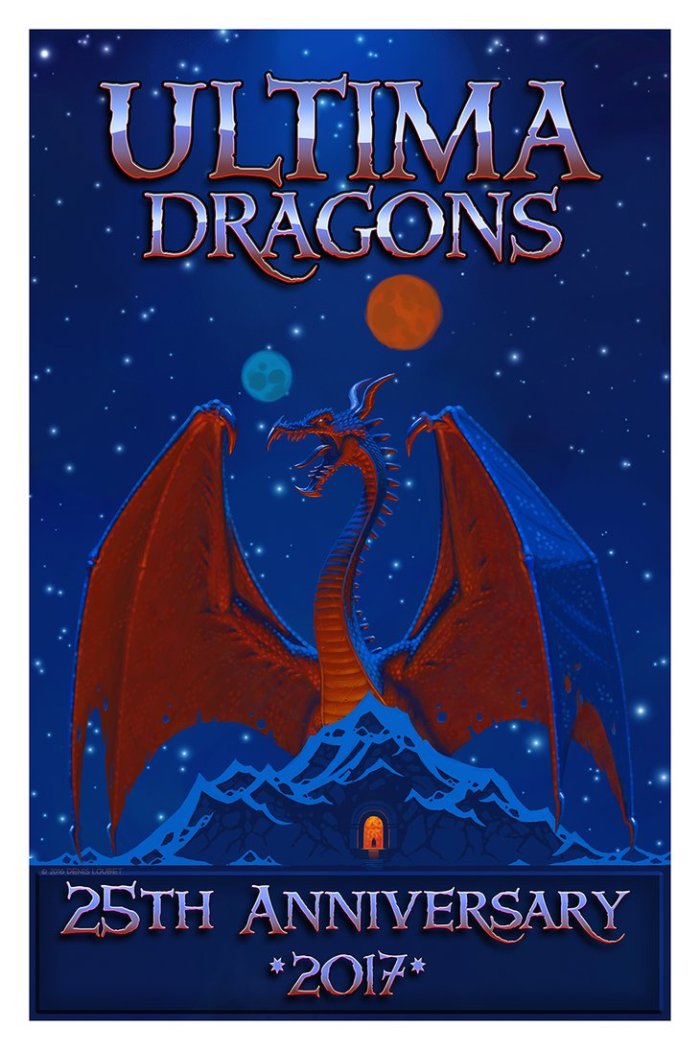 Up next is a neat 3D rendering called Eriniel and Solaran by American deviantartist Letoya, posting as Silverwind3D, of her UO character.  Ultima Online is also well known for being a “social and economic experiment,” where players have the opportunity to create businesses that other players can patronize.  In this case, Letoya created an elven grandmaster veterinarian and animal tamer, and recreated her here with her pet dragon.  Check out more in Letoya’s gallery.

And finally, here is Dragons Fury by U.K. professional artist Tom, posting as TDA-3d.  It was my favorite of the “traditional” artworks I found for this Ultima series, although there was a lot of great digital art out there as well.  Artist Tom captions it, “Inspired by Ultima Online — if you’ve ever played it note ‘my’ full set of Valorite with heater shield.”  I don’t know what that is, but I’m sure UO players will get the reference!  Check out his gallery for more.

All right, once again apologies for the delay.  I really did intend to finish a post each week, but it’s just not working out that way as these posts get longer and longer.  However, I assure you, I am still committed to finishing this series, no matter how long it takes.

I haven’t been making time for writing as much as I’d like, with so many other things going on now that spring has sprung — but I’ve also been itching to get back to work on Finding Dragons, and I have to finish these posts first, so I’m hoping that will spur me on!

Please check back soon for my “V” post — we’ll be looking at an ancient myth again, this time from Iceland!  And as always, thank you for reading, take care, and stay creative!