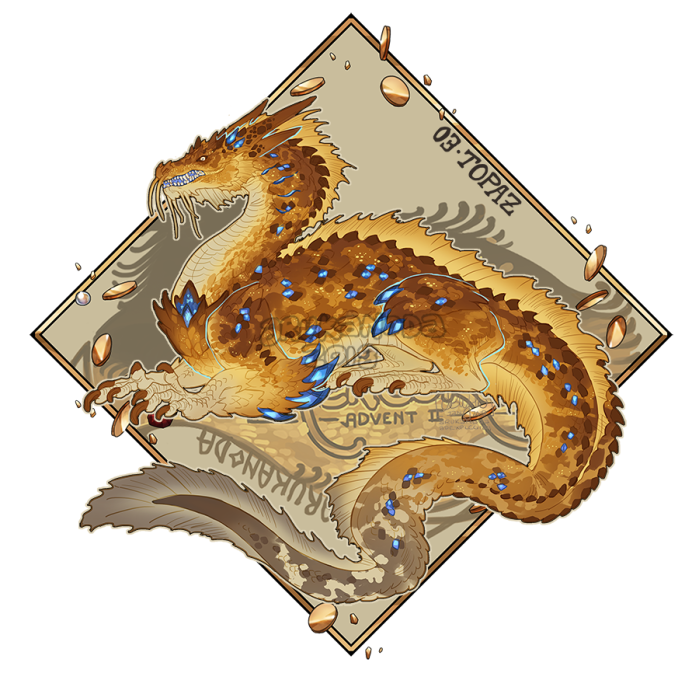 Happy Birthday to all my November-born readers!  This month you get two stones, Topaz and Citrine, which can get confused because both are (usually) orange/ yellow stones… so let’s start with this Topaz dragon by the awesome deviantartist Ariel Blyth, posting as Arukanoda (and purchased by fellow deviantartist Livard).  I love her description of this Pet-sized dragon:

An aquatic dwelling Eastern whom has grown fancied to sun bathing; showing off its gorgeous golden sheen.  Many think that it is a noble visage to see, but fishermen have officially dubbed the reptile as the almighty salmon thief.

That sounds so cute!  But be warned before you run out to get your very own — according to Arii’s size chart, “Pet” size still means the size of a large horse!  Be sure to check out her (much smaller Pocket-sized) Citrine dragon as well, as also Arii’s gallery, official website, Twitter, and Tumblr! Anyway, from the Wiki:

The name “topaz” is usually derived … from the Greek Τοπάζιος (Τοpáziοs)  … from Τοπαζος, the ancient name of St. John’s Island in the Red Sea … from which a yellow stone [not topaz] was mined in ancient times; … Alternatively, the word topaz may be related to the Sanskrit word तपस् “tapas”, meaning “heat” or “fire”.

Topaz in its natural state is a golden brown to yellow, a characteristic which means it is sometimes confused with the less valuable gemstone citrine.  … Orange topaz, also known as precious topaz, is the traditional November birthstone, the symbol of friendship, and the state gemstone of the U.S. state of Utah.

Many modern English translations of the Bible, including the King James Version, mention topaz. However, because these translations as topaz all derive from the [Greek] Septuagint translation topazi[os], which as mentioned above referred to a yellow stone that was not topaz, … it should be borne in mind that [true] topaz is likely not meant here.

Staying with the orange topaz, check out this precious dragon doll called Lord Topaz by Hungarian professional creator Boglarka Zilahi, posting as hikigane (created as a commission for fellow deviantartist Mors-Regis).  There are more photos of this fantastic beast and other crazy creatures in his gallery, and you can follow this talented artist on Facebook and Instagram for more!

So even though Topaz usually comes in orange and it’s the official birthstone, there are other varieties and I just had to share these.  From the Wiki again, “Naturally occurring blue topaz is quite rare. Typically, [light-colored topaz stones are] heat-treated and irradiated to produce a more desired darker blue.”  But they are very pretty — and if you look close, Arii even included some blue topaz accents in her Topaz dragon above!

Or maybe it’s not radiation, maybe it’s magic that turns the stones blue — here is Topaz Dragon by Canadian professional artist Jen Elliott, posting as jocarra, from her work with Endless Realms, a “cutting edge pen-and-paper RPG” by Lunar Games, Inc.  She writes that “since we already had a few orangeish coloured dragons” she chose blue topaz for this “mage-priest of dragons” based on a stone with “mental, spiritual, and psionic power” qualities.  Find her Citrine dragon and more fantasy art in her gallery. 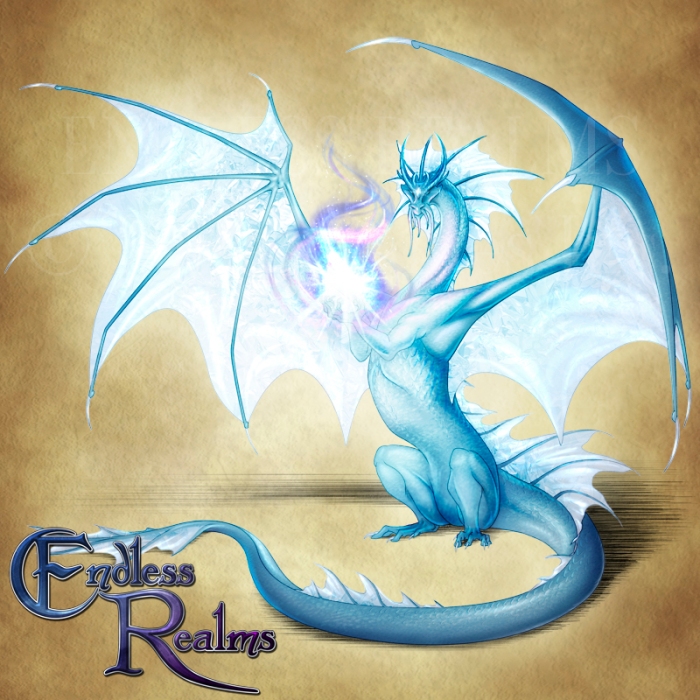 And then when I saw this beautiful Dragon Brooch by Australian professional artisan Stephanie Pride, I had to include it with the blue topaz, even though Stephanie’s site has been dormant since 2014 and I wasn’t able to track down any current info.  (She made a Firefly reference in a comment on this image that sealed the deal — points to anyone who re-comments it below!)  This brooch matches an equally beautiful Dragon Chain she created using the same topaz stone, which won her a Daily Deviation in 2008.  Look for more designs in her gallery, including some great Harry Potter inspired work.

Then we’re back to orange/ yellow with the Citrine dragons — from the Wiki:

Citrine is a variety of quartz… [and] natural citrines are rare; most commercial citrines are heat-treated amethysts or smoky quartzes. … It is nearly impossible to differentiate between cut citrine and yellow topaz visually, but they differ in hardness.

The name is derived from the Latin word citrina which means “yellow” and is also the origin of the word “citron”. Sometimes citrine and amethyst can be found together in the same crystal, which is then referred to as ametrine.

Citrine has been referred to as the “merchant’s stone” or “money stone”, due to a superstition that it would bring prosperity.  Citrine was first appreciated as a golden-yellow gemstone in Greece between 300 and 150 BC, during the Hellenistic Age. The yellow quartz was used prior to that to decorate jewelry and tools but it was not highly sought-after.

So first we have to take a look at this beautiful November Dragon by American artist and crafter Amaze-ing Hats — which someone in her comments pointed out looks like a baby Dragonite (from Pokemon), and I have to agree!   She also doesn’t say if this is supposed to be a topaz or citrine dragon, so I’m choosing citrine to balance the post, lol!  Order your own customized dragon at her website, and see more dragons and creations in her gallery.

Then up next we have another pendant from the team of Katarzyna Mielnik-Grzybowska and Mariusz Frodyma of Lunarieen Ltd. called Axghasthar – Silver and Citrine, featuring another dragon-wing design.  Of course, they have a companion piece in their Anghthar Dragni – Silver and [Blue] Topaz piece, so check that out.  Also see their amazing gallery and get your own in their online and Etsy shops.

This next one is by a new-here Australian professional artist Kiba, posting as Eeeviee, of their Flight Rising character Citrine, who they write is “very cuddly and gay and 6 meters long.”  Besides that, I love the sparkles and the motion this drawing evokes, don’t you?  See more of their art at their gallery or support their art on Ko-fi. 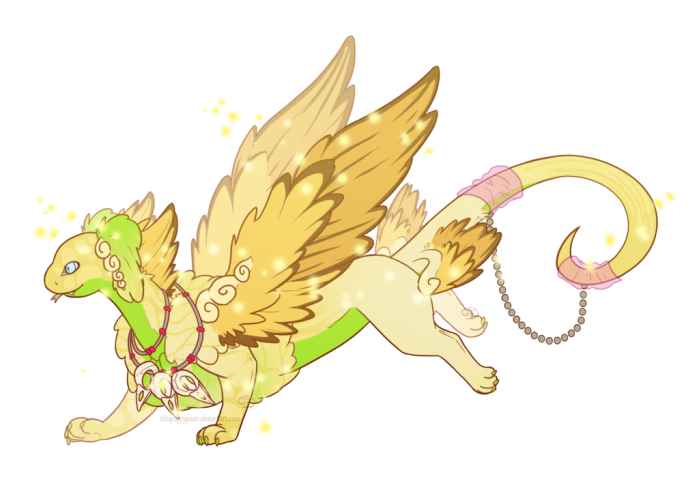 And finally we have this amazing Citrine Dragon by Turkish professional artist Kerem Beyit, “another card art for [the] Draco Magi Game,” a two-player card game that “incorporates area control, bluffing, hand management, deck building and deduction,” according to the review on Board Game Geek.  You can see more of Kerem’s work at his amazing gallery and follow him on Facebook, Tumblr, and his official website.

And that’s another birthstones post in the books!  I didn’t get very much done on the cross-stitch this month, but I’ll hopefully be able to show another update on that next month.  Come back next month for December’s stones – that’s the troublesome month with three, so it’ll probably be over-sized, stay tuned!

Next week come back for some Thanksgiving dragons for the American holiday, and then another Writing Thoughts post to wrap up November!

Thank you as always for reading, take care, and stay creative!