Happy Birthday to my August-born readers!  You’re another lucky month with three different birthstones — Peridot, Spinel, and Sardonyx — but Peridot is by far the most popular, so let’s begin with the adorable peridot-colored August Dragon w/ Bow by American artist and crafter Amaze-ing Hats.  The artist writes, “The little girl who this dragon is for has named her Sweetie Dragon.” Of course!  You can see more great crafts in her gallery and order your very own crochet dragon at her website.

According to the Wiki:

Peridot is gem-quality olivine … The origin of the name peridot is uncertain. The Oxford English Dictionary suggests an alteration of Anglo–Norman pedoretés (classical Latin pæderot-), a kind of opal, rather than the Arabic word faridat, meaning “gem”. …

The earliest use in England is in the register of the St Albans Abbey, in Latin, and its translation in 1705 is possibly the first use of “peridot” in English.  …

Olivine in general is a very abundant mineral, but gem quality peridot is rather rare.  This is due to the mineral’s chemical instability on the Earth’s surface.  …  The largest cut peridot olivine is a 310 carat (62 g) specimen in the Smithsonian Museum in Washington, D.C.

Next we have the Peridot Green Dragon by American professional crafter Becca Golins, posting as DragonsAndBeasties.  I love his interesting (tentacled?) head, and the pose is great too.  Check out more from Becca in her amazing gallery and order your own from her Etsy shop. 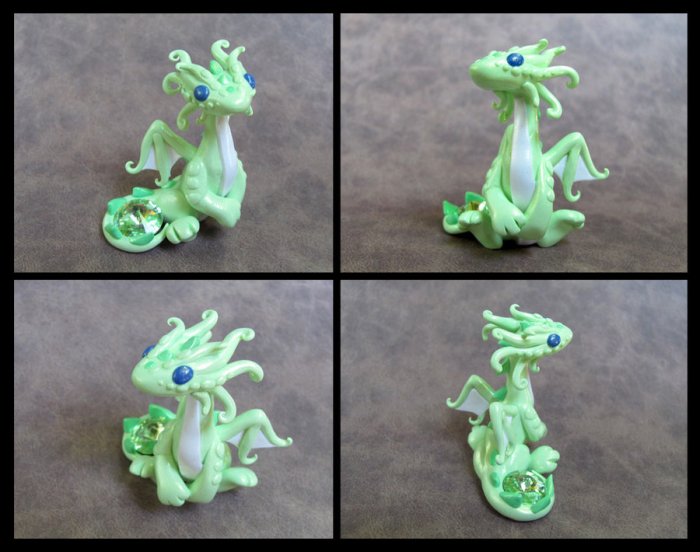 Then we have this beautiful Peridot by professional artist Candice C. Sciortino, who posts as Mythka (and was purchased by Bio-Chimera).  While this one is gorgeous, I seem to have finally found the two gems she hasn’t illustrated yet — there was no mention of Spinel or Sardonyx in her exhaustive archive of dragons-a-day in her gallery!  As I mentioned above, those gems are rarer as the symbol of August so perhaps that’s why, but I do plan to mention it to her in my notification. 🙂

Up next is a real cutie, called Peridot the Stuffed Dragon by American artist and crafter Skylanth.  I love the cream accents and the pretty dragon-sized “necklace for her, or a kid-sized bracelet for a human munchkin.”  You can see more in this artist’s lovely (though perhaps defunct) gallery, and order your own plush artwork at her active Etsy shop Sky Dragons. 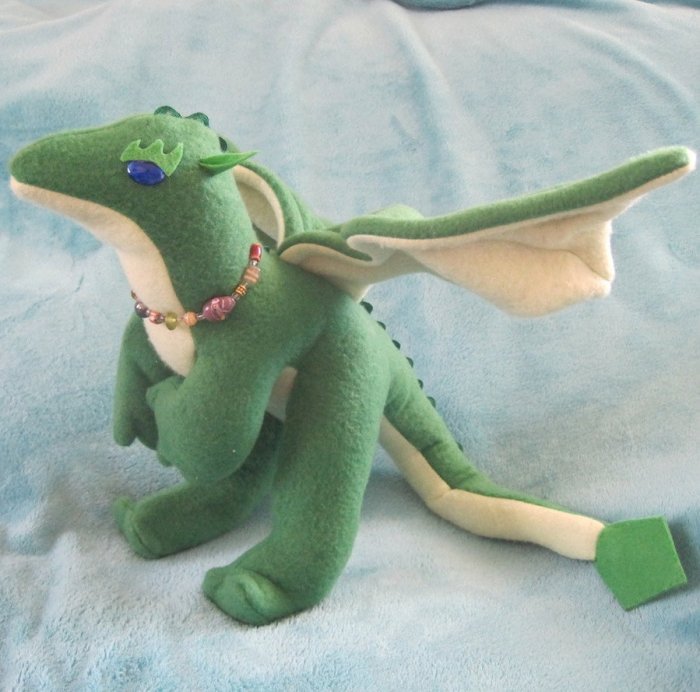 Then we go from soft and fluffy to sharp and pointy!  Here is Peridot Hunter by American deviantartist CandaceBell.  The detail in this large sculpted dragon is amazing so check out the full image, and although this seems to be another defunct deviantart account, while you’re there you can still check out many other dragons in her gallery. 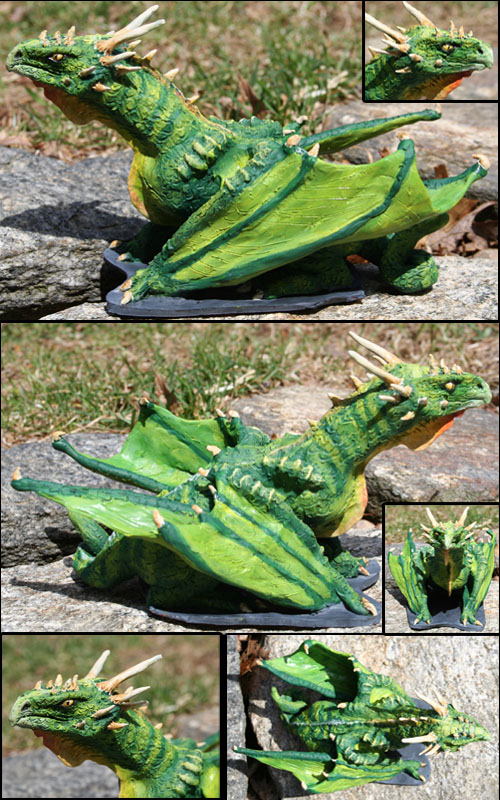 Then our last Peridot dragon is another monthly favorite — here is Dragon Birthstone SAL – August/Peridot by American artist and crafter Gayle Tominaga, posting as jijikit, and created from a 2017 Mystery “Stitch-a-Long” pattern by Brittany Church of InglesideImaginarium.  I love this baby Quetzalcoatl dragon! 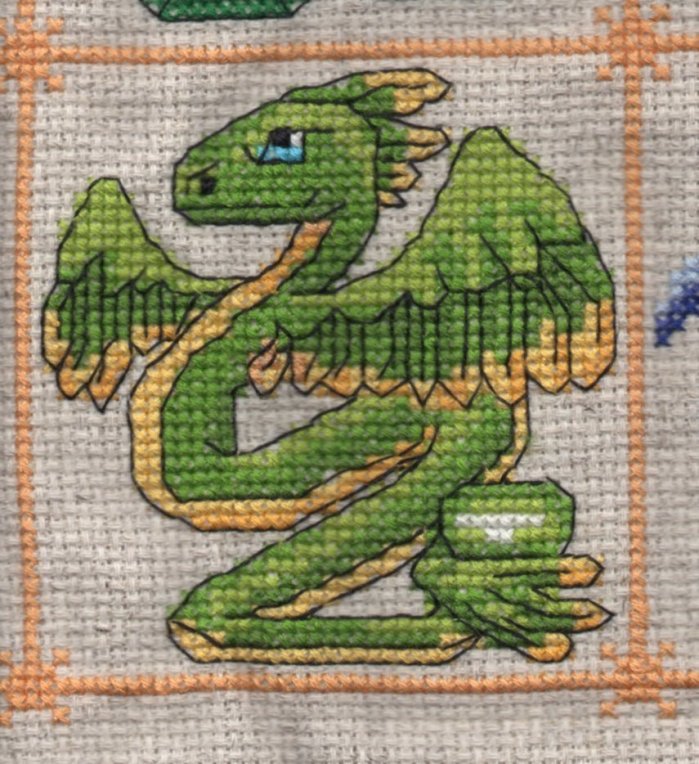 I definitely blame both Gayle and Brittany for my impulse purchase at a gift shop in Ireland — three bookmark-sized cross-stitch kits!  When will I ever have time to do them, I wonder?  One is colorful Celtic knotwork, one is a bird from the Book of Kells, and one is three hairy cows that my husband loved and begged me to buy and make for him.  If they’re ever finished, I’ll be sure to post the pictures. 🙂

I only found a few dragons of the other two stones, so I picked my favorite of each.  First, from the Wiki:

Spinel … is transparent to opaque with a vitreous to dull luster. It may be colorless, but is usually various shades of pink, rose, red, blue, green, yellow, brown, black, or (uncommon) violet. There is a unique natural white spinel, now lost, that surfaced briefly in what is now Sri Lanka.

Some spinels are among the most famous gemstones; among them are the Black Prince’s Ruby and the “Timur ruby” in the British Crown Jewels, and the “Côte de Bretagne”, formerly from the French Crown jewels. The Samarian Spinel is the largest known spinel in the world, weighing 500 carats (100 g). …

And here is Spinel by Finnish deviantartist Iida-Maria Laitala, posting as Helmiruusu.  I love the dynamic pose and the light breaking through the clouds behind is just amazing. You should definitely go see her gallery and check out her Tumblr and Instagram for more breathtaking fantasy artwork. And then we have the last birthstone for August — from the Wiki:

Sardonyx is a variant [of Onyx] in which the colored bands are sard (shades of red) rather than black. Black onyx is perhaps the most famous variety, but is not as common as onyx with colored bands. …

The ancient Romans entered battle carrying amulets of sardonyx engraved with Mars, the god of war. This was believed to bestow courage in battle. In Renaissance Europe, wearing sardonyx was believed to bestow eloquence. A traditional Persian belief is that it helped with epilepsy. Sardonyx was traditionally used by English midwives to ease childbirth by laying it between the breasts of the mother.

This gem sounds like quite the stone — I wonder why it’s not more popular in dragon artwork?  Luckily I did find this amazing Sardonyx by Canadian deviantartist Julia, posting as depcow, another crafted dragon just chilling out in nature.  🙂  Check out her gallery for lots more crafted dragons and fantastic beasts.

So before I leave you I have to mention that sadly I’ve never made the time to check out the animated TV show Steven Universe, even though I’ve heard nothing but wonderful things about it.  I did read a bit more about gem-based show this week though, because I came across lots of SU fanart in my search for dragons because of the popular SU characters Sardonyx and Peridot.  That, of course, lead me to this adorable Perikitty by American deviantartist Lauren, posting as Cargorabbit, and of course I had to share her.  You can find more adorable work in her gallery and follow her on Tumblr.

Even though they haven’t been working out as very short, next week I’ll be back with another ‘short post’ so perhaps I can try to get another island written for Finding Dragons.  I had a good start to that project, but then vacation kind of threw my plans out of whack, so I hope I can get back into it!

I’ll have a Writing Thoughts post the week after that, and then my gosh, we’ll be done with August.  What happened to this year?  Yeesh.  I hope you’re still having a great summer — thank you as always for reading, take care, and stay creative!

Scribbler of Fantasy Tales and stories of a darker nature