M is for Mulan

Halfway done with the April 2017 AtoZ Challenge!  Today let’s take a look at another Disney dragon, the very funny Mushu from the 1998 animated movie Mulan.

Hey, dragon, dragon, not lizard.  I don’t do that tongue thing.  –Mushu

That’s just one of the many funny lines actor Eddie Murphy delivers as the voice of Mushu in the film, uploaded in animated form by Portugese Pintrest user Inês Baptista.  But since I can’t use a .gif as my featured picture, here is another image of Mushu Challenging the Stone Dragon from the website Oh My Disney:

According to the Disney Wiki:

Mushu is an anthropomorphic red dragon [and Mulan’s] closest companion, acting as her guardian and guide.

Mushu was once a guardian spirit of the Fa family, but he had been demoted to the humiliating position of an incense burner and gong-ringer for the deceased Fa ancestors ever since he failed to protect a family member ….

Mushu’s reputation would suffer dearly from this, with the eldest of the ancestors refusing to even acknowledge Mushu as a “real dragon,” evoking a bitter and eager-to-please side to his personality.

When Mulan runs off to join the Chinese army, Mushu is tasked with bringing her back home by the Fa ancestor spirits.  Instead, however, he hatches his own plan to make Mulan into a war hero, and thus regain his own reputation.  Things don’t go very smoothly when Mushu introduces himself to his charge, however, leading to this scene including the “lizard” quote above, and also the oft-quoted line, “Dishonor on you!  Dishonor on your cow!” 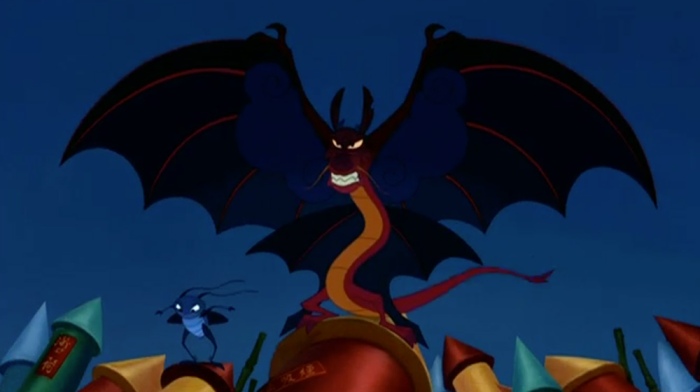 Those are actually from a kite he’s using to look menacing, telling the fireworks attendants that he is “their worst nightmare” to scare them away.  In reality (again from the Disney Wiki):

Mushu is based on a traditional Eastern dragon, which is radically different from Western dragons. Unlike their Western counterparts, Eastern dragons could control many elements and did not require wings to fly, and were portrayed as benevolent creatures, oftentimes respected as gods.

There a lot of amazing fanart out there, as Mushu seems to be a very popular subject, so let’s get to it, shall we?

First up, here is a really detailed Mushu sculpture by Brazilian deviantartist Margareth of MD Dragons, posting as maga-01.  You can see more of her seriously epic dragon sculptures in her gallery, and follow her on Facebook for more photos. 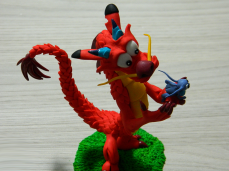 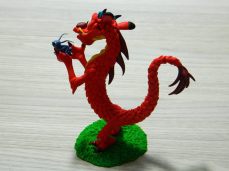 Next, here’s an awesome Mushu Cross Stitch created by French deviantartist Sandrine, posting as Santian69.  One of these days, I’ll pick up my stitching again — maybe once my book is written, lol.  You can check out Sandrine’s gallery for more including many cross stitched pieces, and even get the Mushu Pattern or one of the many others Sandrine has created for yourself!

Next up, you can watch a quick video as U.K. professional artist and animator Paris Christou of Toon Box Studio draws Mushu in four different poses for his Youtube series How to Draw Cartoons Step-by-Step!  It’s really neat to watch, and after each initial sketch, Paris “speeds things up” as he does clean-up and adds finishing touches to each, and in the lower left corner he plays some of Mushu’s funniest clips from Mulan.  He’s also got a deviantart gallery featuring his original pinup character Cherry, so check that out as well.

There were so many great images, it was hard to pick just a few today!  This next one is a much bigger version of Mushu, perhaps as he was before he got demoted?  I really like the style by American deviantartist KCDragons, and you can see more dragons in their gallery.

Next up, this is a Flight Rising dragon called Mulan’s Guardian created by American professional artist Kallan, posting as Felis-Draconis.  They’ve done a great job mixing the designs of eastern and western dragons, don’t you think?  In fact, it reminds me a little of my inspiration sculpture from my Finding Dragons post — no wonder I like it so much!  You can see more great art in Kallan’s gallery.

And finally, this next is a picture of Mushu in a whole new light.  I love this Twisted Princess: Mulan by American deviantartist Jeffrey Thomas, posting as jeftoon01.  It’s just one in a series of these he’s done, and he writes elaborate captions to explain his images, which you can read below!  See more of Jeffrey’s great Disney-inspired art in his gallery, or at his blog, The Art of Jeffrey Thomas.

The story behind her design is the Huns destroy Mulan’s village, killing everyone…including her. Her ancestors send Mushu to retrieve the spirits of their fallen family. Upon collecting Mulan’s spirit, she begs Mushu to restore her spirit to her body so she can defeat the Huns and avenge the death of her family.

Mushu does so, but in order to bring her back to life, he must fuse his body with hers. When he does, he becomes a living tattoo on her body, his appearance altered by Mulan’s rage and hatred for the Huns.

That is just too cool.  Thank you so much for checking out my AtoZ Challenge!  Whew, I’ve made it to the halfway point, and tomorrow I get a break!  Be sure to come back on Monday as I continue my Dragons in Our Fandoms journey, when I feature some dragons in a whole new style… this one last Mushu creation by an American deviantartist posting as retinence, with an amazing gallery as well, might give you a clue!  Take care!