It’s day two of the A to Z Challenge!

B is for Blue Eyes White Dragon 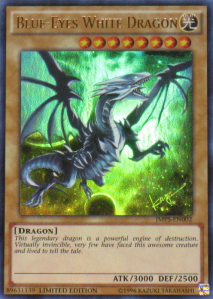 Yu-Gi-Oh! is one of my favorite fandoms, although I’ve never played the card game.  It’s a Japanese anime about a group of high school kids who play the card game called Duel Monsters.  The cards they use to battle each other come alive through Seto’s VR technology, and later sometimes even in the real world as the duelists actually summon the creatures.  Ancient Egyptian magical items get thrown in the mix, and some of the characters have ancient Egyptian spirits that share their bodies, and they save the world a couple times.

It’s complicated.  😉  There’s also a lot of slash and poly shipping involved in the fanfic and fanart communities, with great pairing names like Puzzleshipping, Puppyshipping, and Prideshipping — yeah, a lot of them start with P, I’m realizing.

If you’ve seen the show and love it even despite it’s flaws, you might also enjoy a YouTube series called Yu-Gi-Oh! The Abridged Series, done by LittleKuriboh.  From the Yu-Gi-Oh! Wiki: “[YGO:TAS] is focused on making fun of the eccentricities of the [TV show], most prominently the fact that Duel Monsters is a children’s card game, yet is played by teens and adults with unfaltering seriousness and unreal consequences.”  But even though it says “making fun” there, you can tell this parody series is made with love.  You have to love the show in order to make and/or get many of the jokes.

Such as this one — remember I said above that Seto often summons his Blue Eyes White Dragon in triplet?  In the real show, these two are having a very serious talk during their duel, but YGO:TAS turns it into…

Oh man, these AtoZ posts were supposed to be short!  Sorry, once I’m talking about a fandom I love, it’s hard to get me to stop!  Anyway, thanks for reading, come back on Monday for the “C” post (and less silly gifs), and stay creative!!

8 thoughts on “AtoZ: B is for Blue Eyes White Dragon by slifertheskydragon”